Viscount sired a winning double with Magic Rocket (Ascot) and Granlarado (Pinjarra) last week and there was also some surprising news for the Oakland Park resident out of Singapore.

His champion galloper Rocket Man was back under saddle at Kranji and wasn’t fully extended in a barrier trial.  “We just took it easy but he felt exactly like the same old Rocket Man,” jockey Barend Vorster said.  “He tracked the pace and was ready to push forward but I held him back.”

Rocket Man (10g Viscount – Macrosa by McGinty) suffered a tendon injury in 2012 shortly after being rated the third best sprinter in the world.  Black Caviar headed the rankings at 130 followed by Hay List (125) and Rocket Man (122).

He has raced 27 times for 20 wins headed by international Group 1 victories in the Krisflyer Sprint and Dubai Golden Shaheen.  He was also beaten a nose by J J The Jet Plane in the G1 Hong Kong Sprint.

Besides Rocket Man, Macrosa also foaled Our Giant (Giant’s Causeway) who was a Group 1 winner of the Mercury Sprint and Horse Chestnut Stakes in South Africa. 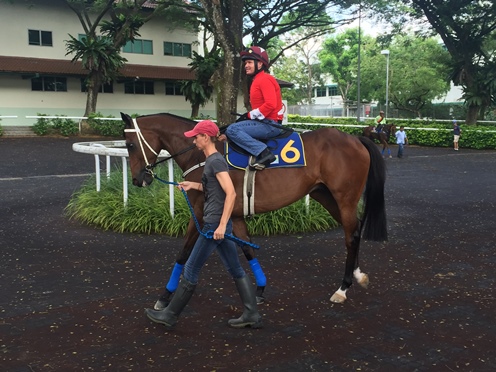