Home Rose blooming for All American

Rose blooming for All American

Incoming Geisel Park stallion All American can kick-off his Sunspeed stud career with a Group 1 victory at Randwick this Saturday.

His promising filly Yankee Rose is a firming $3.80 equal favourite for the $1 million Inglis Sires’ Produce Stakes (1400m) after a barnstorming second in the G1 Golden Slipper Stakes (1200m).

Yankee Rose (2f All American – Condesaar by Xaar) nearly pulled off a sensational first-up victory for trainer David Vandyke at Rosehill.  “She’s still green and will be a very exciting filly over 1600m and further next season,” he said.  “What she’s doing now is on raw ability but that won’t stop her being the one to beat in the Sires’ Produce.

“She worked strongly at Warwick Farm this week and my only worry is the surface.  I hope the track dries out before Saturday because she’s more effective on a firmer track.”

Vandyke indicated the filly will also train on for the G1 Champagne Stakes (1600m) at Randwick on April 16.  “She’s versatile and saves her best for game day.  I would have been disappointed if she didn’t hit the line hard in the Golden Slipper.”

Yankee Rose is a third-crop daughter of All American who retired to Arrowfield Stud after a fitting finale in the G1 Emirates Stakes (1600m) at Flemington.  His first-crop comprised 7 juvenile winners headed by Randwick Group 3 winner Bachman and he followed up with a Top 10 finish on the Australian second-season table last year.

Leading owner-breeder Eddie Rigg will stand All American at Geisel Park in association with Lindsay Park trainer David Hayes and agent Mark Pilkington who were part of the syndicate that raced him to juvenile wins in the LR St Albans Stakes at Moonee Valley and G3 Skyline Stakes at Randwick.  He was also a close-up second to Reaan in that year’s G1 Blue Diamond despite losing a plate in running.

A luckless three year-old campaign followed with placings behind Whobegotyou (G2 Stutt Stakes) and Northern Meteor (G1 Coolmore Stakes) before Hayes brought him back for a career-high victory in the Emirates Stakes.

Responding like a genuine Group 1 horse, he sailed past Cox Plate winner So You Think to score a tremendous victory at headquarters.  “They ran a brilliant time for the mile breaking 1.34s,” Hayes recalled.  “He was an outstanding two-year-old who trained on at four to win a proper Group 1.

“He retired as sound as he raced.  My vet never saw him and I wish I had another one like him.”

All American is a son of champion sire Red Ransom who was represented by his 110th stakes winner when Red Bomber claimed the G3 Shaftsbury Avenue Stakes (1400m) at Flemington on March 5.  His dam Milva (Strawberry Road) won twice in America and is a half-sister to USA Group 1 winning racehorse and sire Rock Hard Ten. 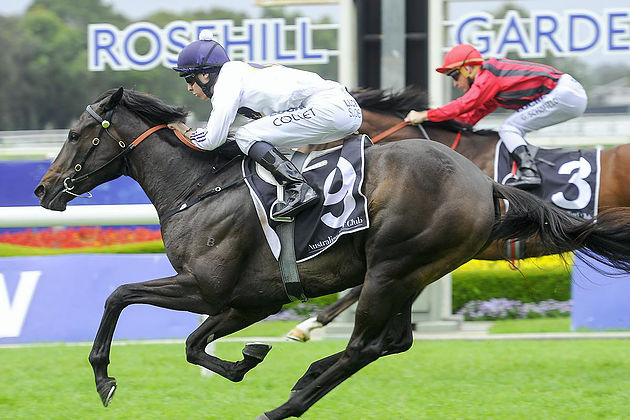