Trainer Andrew Noblet believes his War Chant filly Silent Sedition will only get better after she easily defeated some smart colts in the LR Bendigo Guineas (1400m) on Saturday.

It was a subtle warning for her rivals in advance of the G1 Australasian Oaks (2000m) at Morphettville on May 7.  “She’s on her way to something big,” Noblet said.  “She put the writing on the wall in the spring and I didn’t doubt she would convert that into prizemoney this year.”

Silent Sedition signed off her last campaign finishing fourth in a Group 2 at Moonee Valley and returned to space a Cranbourne maiden field first-up on March 4.

Winning jockey Nick Hall said he was confident a long way from home at Bendigo.  “I can’t fault her.  She’s got a great action and a terrific turn of foot.  She settled perfect today and travelled into the race like a real professional.”

She is the 35th stakes winner by War Chant (USA) who stood at Three Chimneys Farm in Kentucky before transferring to Yarradale Stud.  Her dam Fiorentina (Dubai Destination) is a half-sister to G1 Dubai World Cup winner Monterosso and sold for $45,000 from Korilya Stud at the 2014 Perth Magic Millions.

Silent Sedition will head to the $100,000 Mornington Guineas (1500m) on April 2 before travelling to Adelaide where the G3 Auraria Stakes (1800m) on April 23 is the traditional lead-up to the G1 Australasian Oaks. 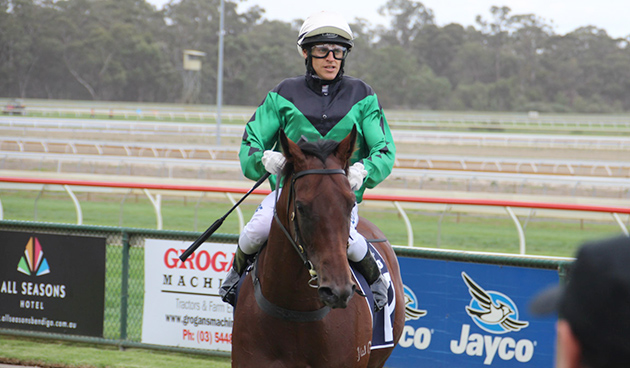