The Andrew Noblet trained three year-old is the one to beat in the G1 Australasian Oaks (2000m) on May 7 after snatching a narrow victory in the G3 Auraria Stakes (1800m) at Morphettville on Saturday.

Silent Sedition ranged up and ran down C’est Beau La Vie (Bernardini) by a neck after the leader kicked to a clear lead at the top of the straight.  “I was a bit worried at the furlong but she got the job done,” Noblet said.  “She’s a quality filly and tries so hard.  You can’t ask for more than that.”

The Caulfield-based visitor arrived in Adelaide following a Listed victory in the Bendigo Guineas (1400m) last month.  She has raced 8 times for 3 wins and her only unplaced run was in the G2 Moonee Valley Fillies Classic last October when an unlucky fourth.

“The Australasian Oaks is a whole new ball game,” Noblet explained.  “The extra 200 metres doesn’t seem like much – but it is.  I said she was on her way to something big at Bendigo and, looking at her now, I expect she will handle another furlong.”

War Chant (Danzig) sired Bunbury 3yo maiden winner Pretentious Chant on Thursday and his 2yo filly Dainty Tess completed a hat-trick at Ascot a couple of hours before the Auraria Stakes. 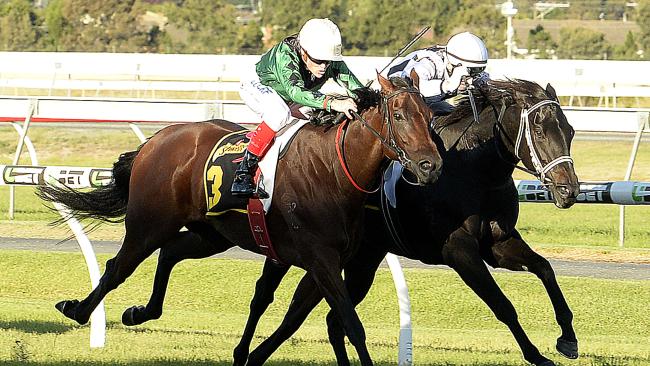