All American filly Yankee Rose will be seen at her best when stepping up to 1600 metres in the Champagne Stakes at Randwick on Saturday.

That’s according to trainer David Vandyke who thinks a mile could actually represent her optimum trip.  She was runner-up in the G1 Golden Slipper (1200m) first-up after a spell and then cruised home in the G1 Sires’ Produce Stakes (1400m) on April 2.

“Let’s hope she proves me right on Saturday.

“It’s the race I had her aimed at six months ago.  I thought she would be a genuine miler and she has had the two runs back now and I think we will see her at her best on Saturday.

“I know her back to front.  I’ve got a set routine and model now that has worked in the past.  She has put on a couple of kilos and is very well.  She is typical of a horse that has had a couple of runs and is seasoned and ready to shine.”

Plans for Yankee Rose beyond the weekend remain fluid with Vandyke keen to see how the juvenile recovers from the Champagne Stakes before deciding on future targets.  “There is no hurry to get her straight back into the paddock.  We will just get her through Saturday and give her an easy week before deciding what to do.”

A daughter of Geisel Park Stud sire All American, she is owned by a syndicate of 18 first-time owners who have rejected a seven-figure bid for the filly. They have also pledged to keep Yankee Rose in Vandyke’s stable when he relocates to the Sunshine Coast following the Queensland Winter Carnival.

Yankee Rose has opened up a $1.30 TAB favourite for the Champagne Stakes. 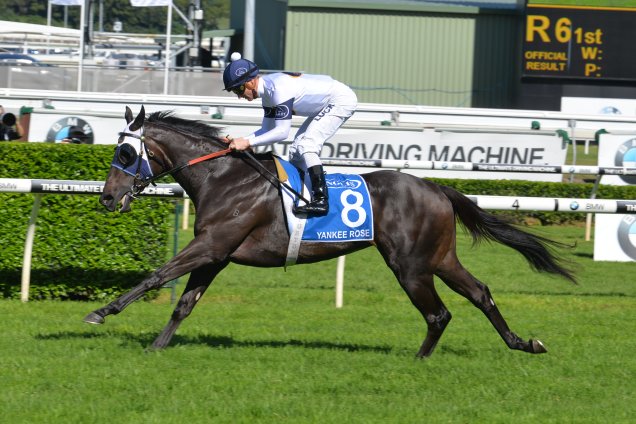