Erika won the Rules Club Queen of the South (1400m) to send Blackfriars through $4 million in prizemoney this season.  She has been a regular money-spinner for connections winning 3 races and being placed 4 times in the last twelve months.

Her only unplaced run this season was a midfield finish at Warwick Farm in October.  “She’s a nice mare and toughed that out really well,” trainer John Bateman said.  “We might go back to town and find another race for her now.”

Erika (4m Blackfriars – Europium by Metal Storm) is a half-sister to Group 1 winner Moment Of Change and, like him, was bred by Capel-based Sovereign Stud owner Tracy Knotts.  Second-dam Kosleta (Zabaleta) won the 1996 R J Peters Stakes and among her foals was 2006 Belmont Guineas winner Mr Diagnosis (Scenic).

Group 1 winning jockey Jay Ford was impressed by the strength of her win at Wagga.  “I had a bit to do with Erika in the early days but haven’t been able to ride her in a race until now.  She’s up in the weights against mares so it was a gusty effort.”

Scenic Lodge has announced Blackfriars will remain at a $12,000 (plus gst) service fee for 2016.  He is assured of a sixth Sunspeed title in a row this season and will nudge $5 million in earnings if Black Heart Bart wins the G1 Doomben 10,000 or G1 Stradbroke Hcp at the Brisbane winter carnival. 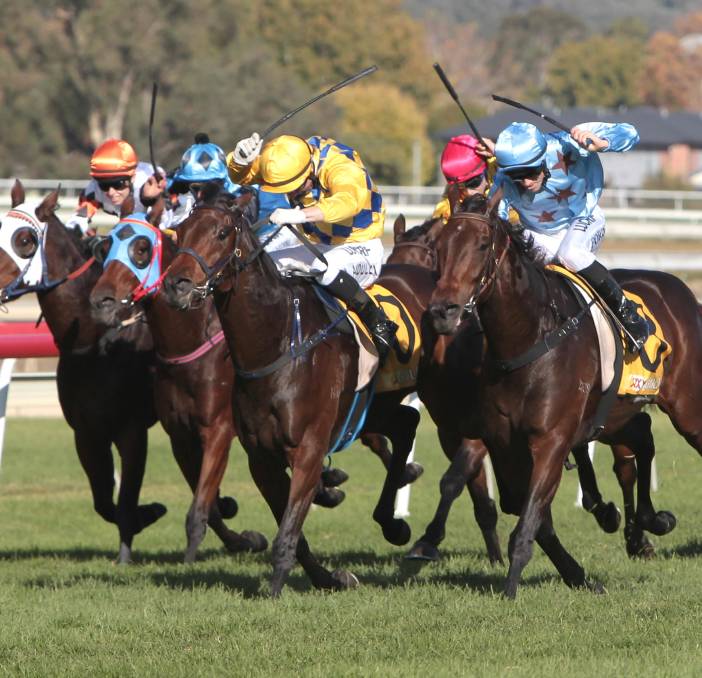 ERIKA
Blackfriars mare storms down the outside to win at Wagga