The David Harrison trained youngster was out of touch at the top of the straight before letting down with a powerful sprint to defeat the favourite Stored Energy (Alfred Nobel) by three-quarters of a length.

Buster’s Shadow (2g Oratorio – Umashadow by Umatilla) was facing the starter for the third time on Saturday and he put the writing on the wall when a fast-finishing second to Unmarked Bills earlier this month.  “I liked his run here last time but I was a bit concerned today when he was off the bit coming to the corner,” Harrison admitted.  “Then he balanced up and hit the line like a real good horse.

“I think he will make a nice three year-old.  I might give him one more run and then spell him for next season.”

Harrison paid $90,000 for Buster’s Shadow at the 2015 Perth Magic Millions.  His dam Umashadow is owned by Lex Piper and is a half-sister to Group 1 winning juvenile Pride of Rancho.  The mare has a yearling filly and filly foal by Oratorio and was bred back to Red Hot Choice last year.

Buster’s Shadow banked $65,000 on Saturday and that helped Oratorio leap-frog Demerit and Snippetson into second spot on the WA 2YO sires’ premiership.  He has won every Sunspeed title in the juvenile division – bar one – since 2010.

Retired Mungrup sire McFlirt made a double for the Great Southern nursery at Belmont when his mare Wink And A Nod won the G3 Belmont Sprint.  Mungrup stands Oratorio for an $11,000 (inc gst) service fee. 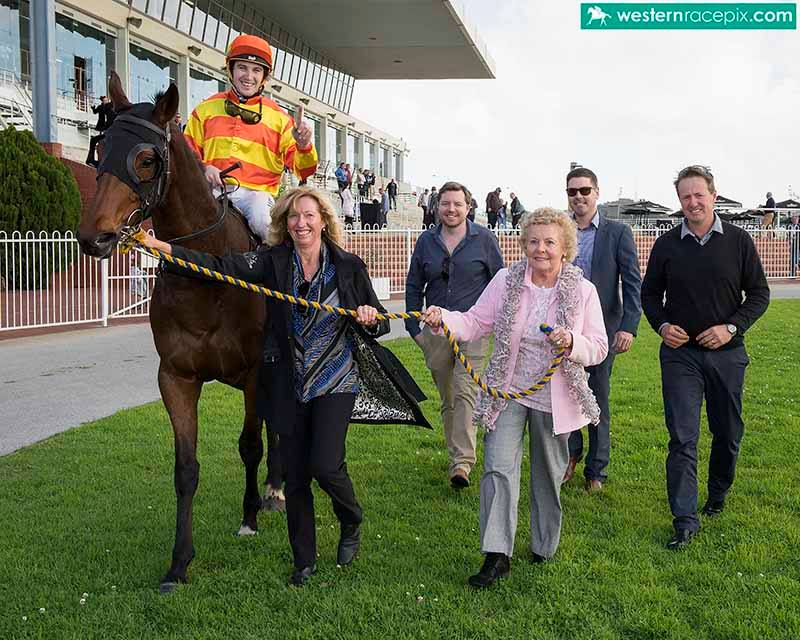