Precious Gem had won a Group 3 at Caulfield before travelling interstate for a career-high victory in Adelaide.  “You can never be confident going into a Group 1,” trainer Henry Dwyer said.  “But I was quite relaxed mainly because the horse looked so well.”

Runner-up Sheidel  looked unlucky going down a nose but can square up in the G1 Goodwood later this month.  Her stablemate Miss Promiscuity parted company with Luke Nolen approaching the home turn and then baulked the former Perth mare in the straight.

The winner’s dam Gem Of Gems (Peintre Celebre) was bred by Denis Marks who raced Hall Of Fame mare Let’s Elope.  She has a yearling colt by Turffontein, a filly foal by Written Tycoon and is back in foal to Toronado.

Econsul (Pins) won the G1 Caulfield Guineas and has been based at Darling View Thoroughbreds in Mundijong since 2013.  Second-crop filly Best Yet To Come opened his black-type tab at the Brisbane winter carnival in 2014 before first-crop mares Precious Gem and Divertire (G3 Dark Jewel Classic) followed suit last year.

Precious Gem will go under the hammer as Lot 528 during the Magic Millions National Sale at the Gold Coast on June 1.  She is a full sister to Econsul’s Singapore black type performer Happy Money and hails from the family of Group 1 winners Turffontein, Alynda, Penny Gem and Hit the Roof. 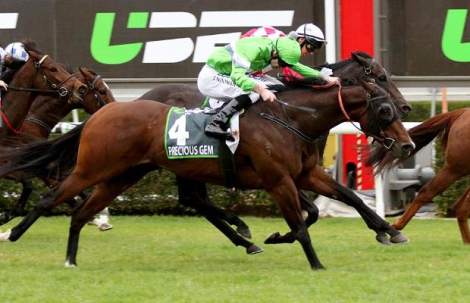