Mogumber Park resident Safeguard received a timely update in the lead-up to his second book when Helmet sired his first black-type winner on Saturday.

Both stallions are sons of Exceed And Excel and Safeguard is a three-quarter brother to Helmet’s LR Hampden Stakes (1400m) winner Archives.

It’s a precocious pedigree and perfect source for stakes winning two year-olds of the future in Perth.

Archives settled just off the speed in the early stages of the Hampden Stakes at Doomben before stable jockey James Mc Donald found a run along the rails in the straight.  “He’s still learning and went on with it when challenged which was very encouraging,” trainer John O’Shea said.  “He had a long float trip up here and will probably run in another fortnight.”

O’Shea was referring to the LR Phoenix Stakes at Eagle Farm on June 4 although the G1 J J Atkins Stakes on June 11 is still an option.  Sheikh Mohammed completed the Hampden Stakes – J J Atkins Stakes double with his Lonhro colt Benfica in 2011.

Darley’s Australian general manager Henry Plumptre was looking even further ahead to when Archives returns as a three year-old.  “He’s a big horse who will be improved.  He got into trouble at his first run and deserved today’s win.  I think you will see a very good horse in the spring.”

Safeguard covered a quality book of 60 mares first-up at Bullsbrook in WA last year.  “He’s a pleasure to handle,” Mogumber Park’s Colin Brown said.  “A large percentage of his first mares were stakes performed or closely related to stakes performers.

“Exceed And Excel has colts like Headwater, Jabali and Outreach retiring to stud this year and Safeguard was at least their equal as a racehorse.  And they don’t breed any better.”

Safeguard will stand for $8,800 (inc gst) this year and to encourage interstate-based breeders, Mogumber Park has put together an innovative agistment, veterinary and service fee package to offset transport costs to WA.  For further details, broodmare owners can contact Colin Brown on 0408 251 880. 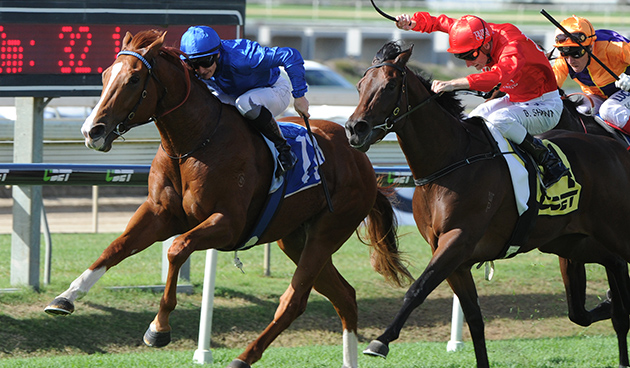