Home I’m All The Talk to stand at Mungrup Stud

I’m All The Talk to stand at Mungrup Stud

Gifted Sydney sprinter I’m All The Talk has been signed by Mungrup Stud to serve his first book in Western Australia this year.

Another Golden Slipper looked likely when I’m All The Talk hit the ground running for trainer Gary Portelli in December 2012.  He won second time out at Warwick Farm and returned from a summer spell to finish fourth in the G2 Silver Slipper Stakes on a Heavy 9 at Rosehill.

Back on a Good 3, the Mungrup newcomer exploded to a three-length victory over Dothraki in the G3 Skyline Stakes (1200m) at Warwick Farm.  “That was a fantastic win,” Portelli said.  “He found plenty and is much better on top of the ground.”

The Golden Slipper dream was alive until the field left the chute on to the course proper at Rosehill.  He was tightened, checked and lost a plate in the scrimmage before finishing midfield behind Overreach.

Back in training as a three year-old, I’m All The Talk had Portelli in raptures after beating champion colt Zoustar in a Rosehill trial.  “He’s come back unbelievable and has grown into a magnificent individual.  He’s made so much physical improvement from last time and is just a beautiful horse now.”

I’m All The Talk started his spring campaign with a fourth in the G3 Concorde Stakes (1000m) at Randwick but his career was put on hold following a life-threating illness.  “The vets said it was a one-in-a-million infection,” Portelli recalled.  “A grass seed got caught in the epiglottis and he couldn’t swallow.

“He was a very sick horse and it sidelined him for a season.  I was heart-breaking because I know he would have won a real good Group race as a three year-old.”

Portelli brought him back as a four year-old with an encouraging second in the G2 Shorts at Randwick splitting Terravista and Famous Seamus.  “We decided to set him for the (G1) Oakleigh Plate and I thought we were home when he kicked three lengths clear in the straight.

“He got run down in the last 100 metres but it was a huge run.  We sent Winona Costin down to ride and she probably pushed the button a bit early.  And in hindsight, I would have liked to get a run under his belt before going down to Melbourne.”

Portelli rates I’m All The Talk the fastest sprinter out of the gates he’s ever trained.  “He was super fast and could match motors with horses like Gold Trail.  He loved to lead and just roll through the gears.

“I’m All The Talk is a terrific stallion prospect for Western Australia and trainers over there will love his two year-olds,” Portelli predicted.  “I want his progeny in my stable, too.

“I would compare him to a sire like Rory’s Jester.  He’s a beautiful chestnut, genuine and sound with a lovely temperament.  And his stock will go early.” 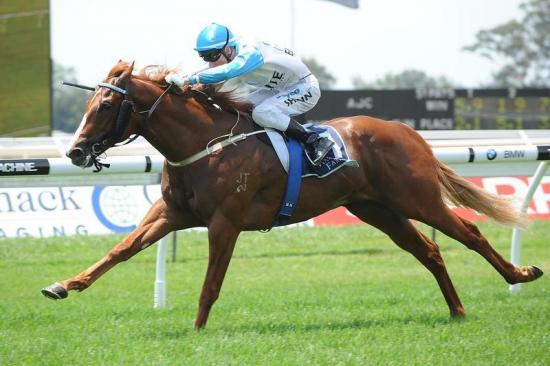