Home Late start no hurdle for Whats The Plot

Late start no hurdle for Whats The Plot

Lynward Park stallion Alfred Nobel (Ire) is an all-purpose sire with just as many early-comers as late-developers.

His Irish-bred four year-old Whats The Plot has taken time to mature but looked an improving type winning the Campile Hcp (2200m) at Wexford on Saturday.  He was beaten a combined 23 lengths in a couple of starts as a two year-old before breaking through in the Roscommon Hcp (2080m) at three.

Whats The Plot (4g Alfred Nobel – Hazarama by Kahyasi) is trained by Arthur Moore for his wife Mary after making 11,500 euros (AUD 16,400) at the 2013 Goffs yearling sale.  His younger half-brother Humphrey Bogart (Tagula) completed a double for the family on Saturday in the LR Derby Trial Stakes (2300m) at Lingfield.

Moore was an accomplished jockey and has trained over 1100 winners from the same stables at Naas since Irian opened his account at Punchestown in 1979.  “Whats The Plot is tough and a cracking fun horse,” Moore’s son John said after the gelding was backed from 5/1 into a 9/4 favourite at Wexford.  “He will probably go hurdling later in the summer.” 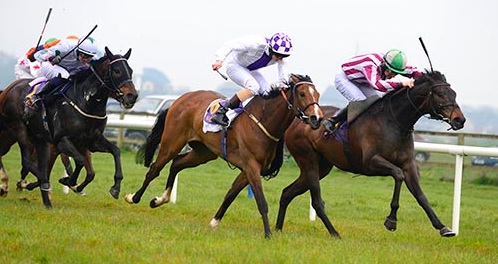