Snippets Land has produced a barnstorming finish to snatch his second win at Listed level in the BRC Sprint (1350m) at Doomben.

The son of Scenic Lodge resident Snippetson won against a leader-bias when he descended from the back-half of the field to defeat Religify by a half-neck on Saturday.  “He’s genuine and a real trier,” trainer Peter Snowden said.  “He isn’t far off top company but isn’t there just yet.”

Snowden indicated the G2 QTC Cup on June 4 is the next target instead of the G1 Stradbroke Hcp a week later.

Snippets Land (5g Snippetson – Seduction Line by Testa Rossa) sold for $120,000 at the 2012 Gold Coast Magic Millions and has returned over $342,040 for Ross Visalli’s Yellowbrick Road syndicate.  He won the LR National Sprint in Canberra last year and was runner-up in the LR Prime Minister’s Cup at the Gold Coast earlier this month.

Snippetson filly My Poppette put the writing on the wall for more black-type when she finished fourth in the G3 Proud Miss Stakes at Morphettville on Saturday.  “Mark Zahra had to ride for luck from the outside barrier and she was stuck behind a wall of horses,” trainer Robert Smerdon said.  “She put herself into the race but then ducked in losing momentum.  It was a huge effort.”

My Poppette was racing second-up after a six-month spell in Adelaide.  She had won the LR Anzac Day Stakes at Flemington and G2 Moonee Valley Fillies Classic last year.

Scenic Lodge stands Snippetson for a $6,500 (plus gst) service fee.  He has pushed through $3 million in progeny earnings this season and is a clear second on the WA Sires’ premiership behind Scenic Lodge champion Blackfriars. 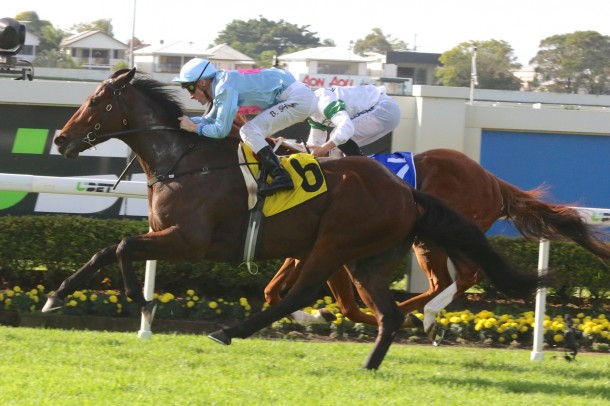