Speedy colt Mr Meticulous has sustained the winning run for Bradbury’s Luck since news of his transfer to Yarradale Stud was announced a fortnight ago.

Bradbury’s Luck has sired five individual winners in that time from his previous base in Queensland and the latest looks a promising type for trainer Liam Birchley.

Mr Meticulous found the lead in the Coastline BMW Hcp (1200m) at the Sunshine Coast on Wednesday but was overhauled by Highdini in the straight.  Claiming apprentice Sairyn Fawke switched the whip to the off-side and the three year-old responded to regain the lead and salute the judge in a close finish.

Marshall bred Mr Meticulous under the Vine Street P/L banner by using Bradbury’s Luck over Rosebowl (King of Roses).  She is an unraced daughter of Argentine Group 1 winner Shine Bridge (Westbridge) who was imported to Australia by Kington Park owner David Hains.

The Sunshine Coast prizemoney sent Bradbury’s Luck through the $1 million mark in prizemoney this season with 28 winners of 51 races.

His unbeaten mare Elegant Composure has four wins to her credit on the Sunshine Coast and she will be gunning for a third win at Doomben this Saturday.  Trainer Chris Anderson has nominated her for the G1 Stradbroke Hcp on June 11.

Bradbury’s Luck (Redoute’s Choice) has a sky-high 67% winning strike-rate and WA Horse of the Year Luckygray is his leading earner after Group 1 victories in the 2011 Railway Stakes, 2012 Kingston Town Classic and 2013 Railway Stakes. 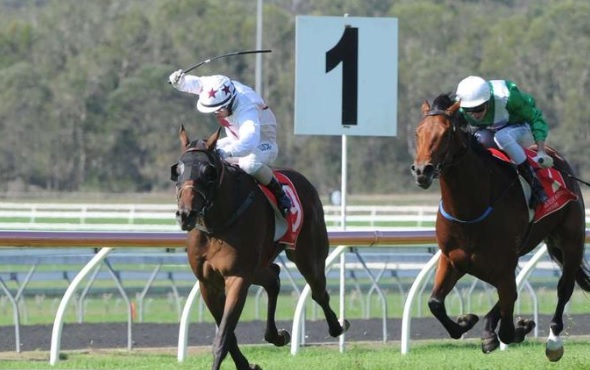