Galileo Gold grabbed a Group 1 for Al Shaqab Racing on the opening day at Royal Ascot and their winning run continued with Dick Turpin colt Najd at Brighton on Tuesday evening.

Najd was held up in the early stages until a clear run appeared in the Ford Summer Festival Hcp (1200m).  Ridden out from the furlong by Tom Marquand, he responded to score by a length ahead of the favourite Capolavoro (Sulamani).

“I was delighted with his first run when second at Epsom,” trainer Richard Hannon explained.  “He had been showing plenty of speed at home and we hopeful he would run well.”

Najd (3c Dick Turpin – Mookhlesa by Marju) is named after the central region of Saudi Arabia and is a half-brother to winners by Indesatchel and Dutch Art.  He was a 70,000gns (AUD 139,040) buy for Al Shaqab Racing at the 2014 Tattersalls October yearling sale.

Dick Turpin is a Top 10 stallion on the Great Britain second-season table this year and he shuttles from the English National Stud to Mungrup Stud for an $8,800 (inc gst) service fee.

Mungrup celebrated a winning run of its own last weekend.  Oratorio sprinter Rafaello won his fourth race in Singapore on Friday and retired sire McFlirt doubled up at Belmont with The Flirt (Belmont Bonanza) and Wink And A Nod (G3 Hyperion Stakes) on Saturday. 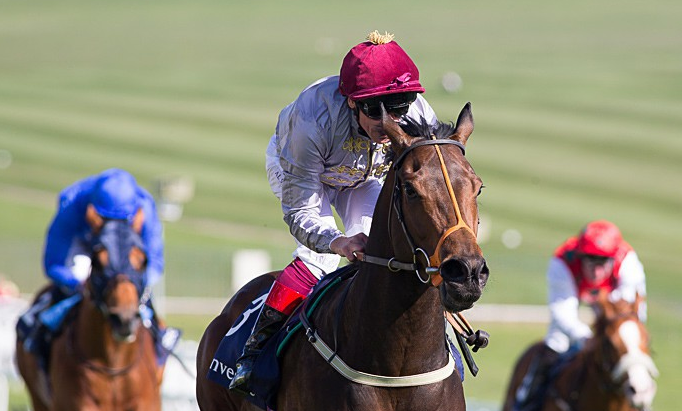