Home All Americans on G1 Express

All Americans on G1 Express

The All Americans have shown they can sprint and now they’re getting over ground like Victorian 3yo Gee One Express.

He made a one-act affair of a Geelong maiden on Tuesday and was still travelling strongly for Craig Newitt at the end of 2200 metres.  “He’s pretty genuine and was way too good for them,” Newitt said.  “You watch him go through the grades next time in.”

Trained by Richard Laming at Cyde on Western Port Bay, the gelding had been runner-up twice before breaking through.  “He was giving away too much start because he was still learning the craft,” Newitt added.  “I got him rolling early on today.  Then I stoked him up and he put them to the sword.”

Gee One Express sold for $50,000 as a yearling at the 2014 Magic Millions National Sale.  His NZ bred dam Inertia (Danasinga) is a half-sister to NZ glamour sire Tavistock from the family of G2 MVRC Cup winner Precedence (Zabeel).

Inertia was bred back to All American and foaled Sonsee Array, now an unraced 2yo filly with Nigel Blackiston at Flemington. 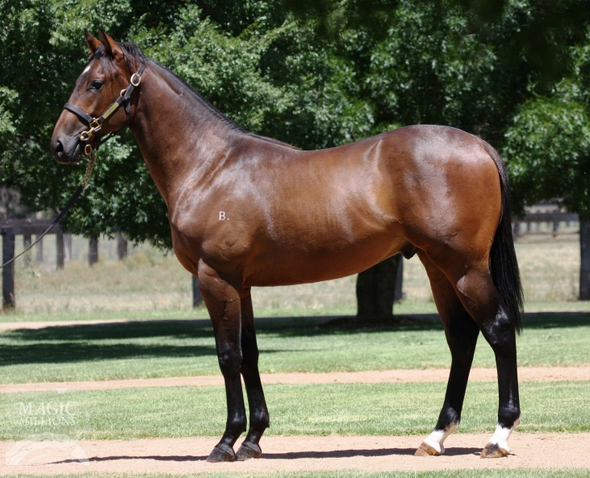 GEE ONE EXPRESS
Pictured as a yearling before relocating to Melbourne