Dick Turpin filly Black Bess bolted in by more than three lengths at Lingfield on Thursday.

Black Bess (3f Dick Turpin – Spring Clean by Danehill) is trained by Jim Boyle and provided jockey Pat Cosgrave with a 34th birthday present in the Charter Fillies’ Hcp (1400m).  She was steadied after the start and kept in touch before quickening to lead at the furlong.  Soon clear and in command, she was heavily eased towards the post.

“Things just haven’t gone right for her,” Boyle said.  “She’s a nice filly with plenty of speed so we might go back to six furlongs.  I’m a bit wary of over-racing her but you have gotta enjoy them when they come along.”

Black Bess is a homebred for Boyle and the Clean Sweep Partnership.  Her dam won a Fairyhouse nursery under Mick Kinane and she has also foaled minor winners by Bahamian Bounty, Pastoral Pursuits and Sleeping Indian.

“She was nearly black when she was born and was the first filly foaled by Dick Turpin,” Boyle added.  “There was only one name we were going to call her and I reserved it a day after she was foaled.

“Hopefully, she will help us plunder a few valuable prizes over the course of the next few years, just as the original Black Bess.”

Dick Turpin is due to cover his next southern season for an $8,800 (inc gst) fee at Mungrup Stud this year.  He is named after an English highwayman whose exploits were romanticised following his execution in York for horse theft in 1739.

He is also famous for a fictional overnight ride from London to York on his horse Black Bess.  It was part of series made famous by novelist William Harrison Ainsworth.

Turpin stole Black Bess at musket-point and she was his steed in many escapades from authorities.  Ainsworth wrote;  “She was coal-black, with a skin smooth on the surface as polished jet; not a single white hair could be detected in her satin coat.  She was magnificent – Every point was perfect, beautiful compact, modelled for strength and speed.

“Arched was her neck as lofty as that of the swan; clean and fine were her lower limbs, as those of the gazelle; round and sound as a drum was her carcass and as broad as a cloth yard shaft her width of chest.”

It’s easy to see why such a vivid description of Black Bess earned her a place in Britain’s folklore and her memory lives on through all the pubs named in her honour. 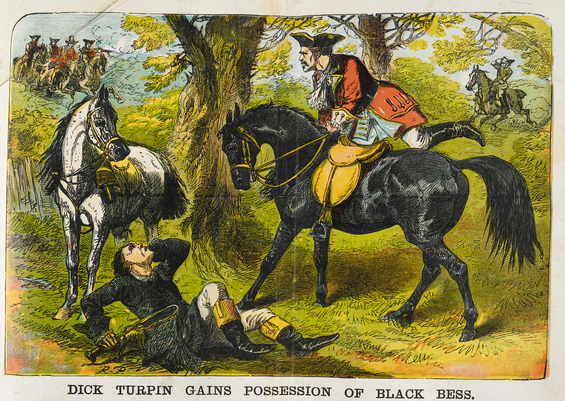