Home Heavyweight 2YO winners by All American

Heavyweight 2YO winners by All American

All American sired a two year-old double at Pakenham on Thursday with a filly and a colt destined for higher marks than winter maidens.

Both youngsters are with heavy-hitters and won against older horses.  Miss Salinger is raced by Arrowfield Stud and giant colt All Out Of Love is a member of Lindsay Park’s team at Euroa.

All American (Red Ransom) is now based at Geisel Park Stud in WA and he has sired 6 individual juvenile winners this season for earnings of $1.67 million.  That group is headed by Group 1 winner Yankee Rose who will be crowned Australia’s Champion 2YO Filly for 2015-16. 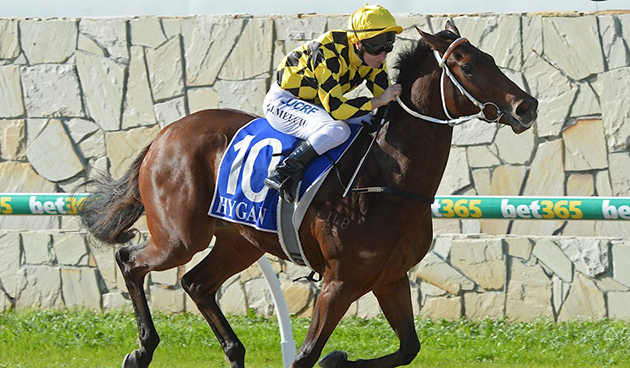 Miss Salinger (2f x Road To Damascus by Flying Spur) started a long odds-on favourite in the Bruce Clough Mazda Plate (1200m) and was never in danger on debut.  “Leading against older horses first-up wasn’t ideal but she bounced out and was happy to be there,” jockey Linda Meech explained.  “She raced well within herself and it worked out.

“I thought she was a three year-old the first time I saw her at the track.  There’s plenty of scope there and I can’t see why she couldn’t make the spring carnival.”

Miss Salinger is a half-sister to the Charge Forward stakes winners Crack A Roadie and Road Trippin’.  They’re from a half-sister to Group 1 winners Bluebird The Word & Porto Roca – the dam of G1 Dubai World Cup winner Monterosso.

Lindsay Park rider Michael Walker reckons All Out Of Love will also make the grade at three although he doesn’t need to grow any taller.  “He’s over 17 hands now!” Walker said after the Martin Collins Australia Plate (1400m).  “We were caught three-wide but it was important to keep his momentum going.

“David (Hayes) told me to put him where he felt comfortable.  He was travelling well but then the saddle slipped backwards and he bucked for a couple of strides.  I might have to put a breast-plate on him next time.

“I like the All Americans,” Walker said.  “They’re big, they have good attitudes and they can all gallop.”

All Out Of Love (2c x Latest Love by Favourite Trick) will be set for the LR Gibson Carmichael Stakes (1600m) at Flemington en-route to the G1 Victorian Derby.  He is from a winning daughter of G1 Levin Bayer Classic winner Love de Tor.