Neville Duncan can’t quite recall how long his Oakland Park has been associated with trainer Fred Kersley.

The racing world, at large, can probably attach a ‘date’ to it however … Saturday 27 October 2001.

That was the day the Oakland Park bred & raced/Kersley trained, Northerly, lowered the colours of Sunline, by winning the first of his two Cox Plates and denying the popular mare three straight.

For some it was like shooting Bambi, but Northerly rapidly became one of the greatest horses – if not THE greatest – to emerge from the West Australian breeding industry. A deserved pin up from coast to coast.

Ultimately, Northerly would win nine Group Ones, place in four more, produce first four finishes in 32 of 37 starts and notch up over $9.3 million in stakes. A superstar from any point of the compass.

“It’s not an exclusive relationship, but has been a very good association over the years,” Duncan points out. “There’s a lot of trust. At Oakland Park we tend to take the gently, gently approach. Patience is the key. We foal them down, handle them from birth and break them in on farm before sending them to Fred. It’s worked pretty well so far.”

The old ‘firm’ was at it again on Saturday when the mercurial Ihtsahymn returned to form in explosive fashion by taking out the Group Three Strickland Stakes over 2000m at Belmont, the five year olds first win in over two years.

Winning three races at two, Ihtsahymn peeled off three in succession at three: the Group Two WA Guineas, the Group One Kingstown Town and the Group Two CB Cox Stakes.

Resuming in the Autumn with a Melvista Stakes and a second in the WATC Derby, Ihtsahymnn was tipped out again, but was not the same horse at four: although he did run the winner to a length in the CB Cox.

Deciding to transfer the horse east to the stables of Patrick Payne, Ihtsahymn failed to salute in eight Victorian outings, before returning to Kersley this May.

Two midfield finishes in the Belmont Sprint and Hyperion Stakes clearly had Ihtsahymn tuned for Saturday though and the Strickland became stakes victory number five for the gutsy gelding.

Despite the lengthy absence from the winners’ circle, Duncan was reasonably confident that Ihtsahymn would make a race of it in the Strickland: “Fred told me that Ihtsahymn was in a very good space last week and that’s probably the first time he’s made that kind of comment about the horse. I think Ihtsahymn was a bit flattened by the time he shifted east but is obviously thriving back here and it’s terrific to see that after winning those good races at three, he’s really proven himself by winning at weight for age as a 5YO,” Duncan adds.

Ihtsahymn now has $1.2 million in stakes from his eight career victories and is, as the name would suggest, a son of Oaklands Park’s former stallion, Ihtiram (also sire of Miss Andretti), from the Umatilla mare, Umatune.

“I purchased Umatune at the Easter Broodmare Sale (2003) in foal to Catbird,” Duncan recalls. “She ended up having to stop over in South Australia where she was covered by Rory’s Jester and produced Jestatune that won the Gimcrack Stakes.

“She was a terrific mare for us – we had her for about six or seven years and I’m pleased to say we’ve got a number of mares at stud out of that family.

“Conversely, we’ve only really got the one mare from Northerly’s family … Karriwood. She has produced a stakes winner in Blackwood and a very good two year old in Sandalwood. He’s only won one of his two starts but looks to be extraordinary.” 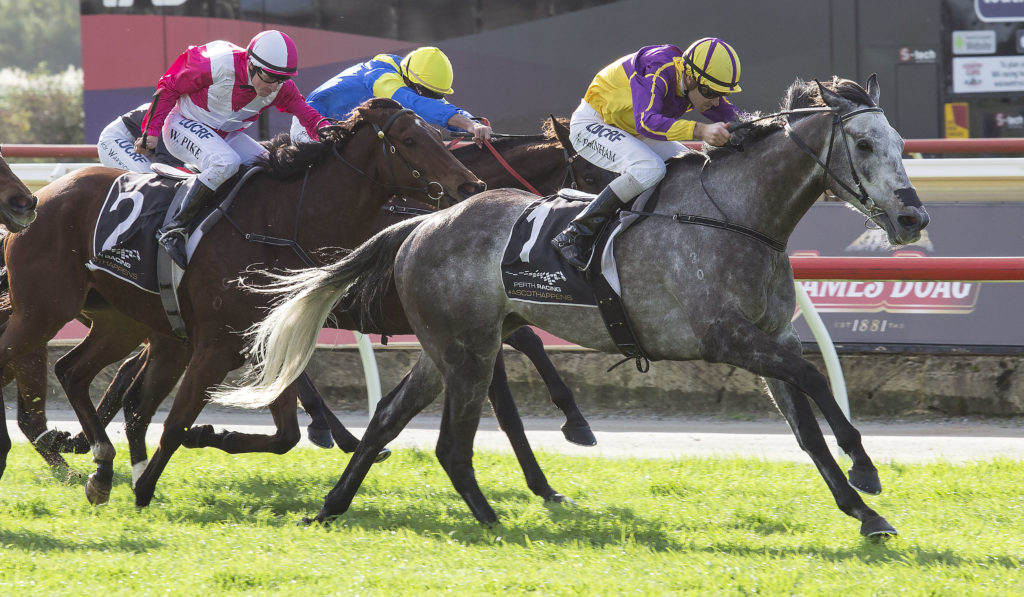