Commercial Bloodstock (FBAA) owner Noel Carter ticked all the boxes when You’re A Rum’in bolted in at Belmont on Wednesday.

“Running in Noel’s race wasn’t by design – it just fitted in nicely with his next start on Saturday week,” trainer Steve Wolfe explained.  “We were confident today.  The 1000 metres was too short but he’s a class horse and will eventually get out to a mile.”

You’re A Rum’in had been runner-up to class filly Blackwood in May and was given a break to get over some minor issues.  “He’s only about 70% fit but was always travelling from a good barrier,” jockey Shaun McGruddy said.  “He gave me a sensational feel on the corner and rounded them up easily.”

The Starcraft gelding is bred to get over ground.  His sire won the G1 AJC Derby and his dam Slippery Madam (Hussonet) is a half-sister to G1 SAJC Derby winner Hard To Get.

It was Carter’s second win with a Wolfe-trained galloper at Belmont this month following My Greek Boy’s victory in the Amelia Park Hcp (1300m) on July 2.  The Myboycharlie gelding was purchased for $25,000 by Commercial Bloodstock at the 2014 Inglis Classic yearling sale.

Earlier this year, Carter and Wolfe paid $135,000 for a well-bred So Secret – Tribulot colt at the Perth Magic Millions.  He’s a full-brother to G2 Karrakatta Plate winner Hobart Jones.

Carter is a Past President of the WA Carbine Club and a member of Federation of Bloodstock Agents Australia (FBAA).  He established Commercial Bloodstock in Perth after a decorated career as a premiership player with Richmond in the VFL and South Fremantle in the WAFL. 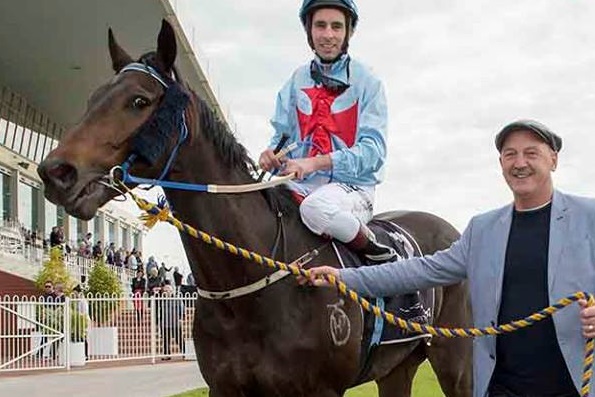