Dancer springs a surprise in Ireland

It was the second victory in as many days for the Lynward Park based sire following Chetan who bought up his fifth career win at Yarmouth on Thursday.

“She’s a smart filly.  We bought her off Colin and Jessica Magnier in the Breeders Sales and we’ve always thought a bit of her,” trainer Keith Clarke said.  “We had her entered up in a Listed race at Tipperary but decided to come here and give her a good education.

“We are now open to offers – Robbie reckons she’s the real deal.”

Clarke and the filly’s owners will market her for multiples of the 15,000 euros she cost at the Goresbridge Breeze-Up Sale in May.  Her dam is a half-sister to Leopardstown stakes winner Akanti (Key of Luck).

The Magniers had pin-hooked Noble Dancer as a yearling for 2,000 euros at Tattersalls in September 2015.

With just two relatively small crops to race in Australia, Alfred Nobel is a close third on the WA 2YO sires’ premiership and is 10th on the Australian second-season sires’ premiership.  He stands at Lynward Park in Bullsbrook for a $4,500 (plus gst) fee. 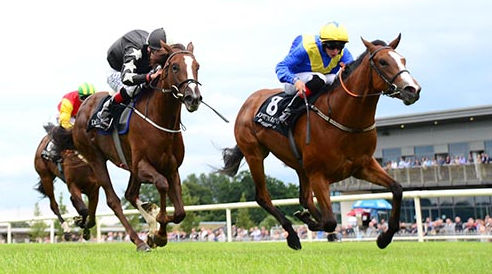