Alfred Nobel colt Explosive Power opened his account this year with a narrow victory in the Lloyd Hcp (1400m) at Carlisle on Saturday.

The Irish-bred grey colt tracked the leaders and was driven along by Jordan Vaughan to lead inside final furlong before holding on to score by a neck from Forever A Lady (Dark Angel).

Explosive Power (3c Alfred Nobel – My Girl Lisa by With Approval) is raced by the Market Avenue Racing Club and was a 47,000 euros (AUD 67,515) buy for trainer Karl Burke at Tattersalls in September 2014.

It was his second wins in 9 starts following a Redcar nursery victory in October.   “He had been a little late to come into himself last year,” Burke said.  “He always looked like he would make a nice three year old.”

The Yorkshire trainer also prepares Alfred Nobel 3yo Carbutt’s Ridge who won at Nottingham on June 23. 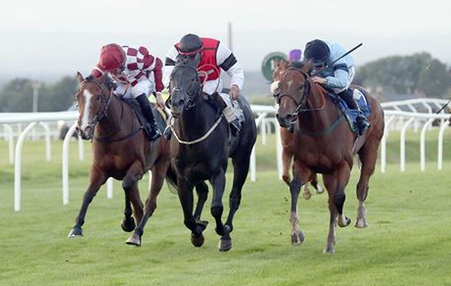