Widely-travelled colt Coming In Hot has given Scenic Lodge sire Snippetson more breathing space at the top of the WA 2YO premiership table.

Coming In Hot flew home to win the Silver Goblet (1100m) at Narromine on Monday in a three-way photo-finish from I’m Imogen (I Am Invincible) and Squared (Strada).

Initially trained by Brent Stanley in Victoria, he was sent to Brisbane and placed on debut behind top colt Nikitas on December 5.  But a Magic Millions Classic campaign was derailed after a below-par performance back at Doomben a fortnight later.

After Stanley was disqualified earlier this year, Coming In Hot transferred to Paul Banks and finished last bar one in a Ballarat maiden on June 1.  Subsequently sold to Tru Blu Bloodstock, he surfaced in NSW with trainer Justin Stanley and, remarkably, was allowed to go out at $12 in the Silver Goblet.

“It’s always a thrill to win a race like this,” Stanley said.  “I was virtually just having a look at him today.  I might give him another start but he’s very immature and needs a bit of time.”

Coming In Hot is the fourth winner from Umatilly (Umatilla), a Sandown Lakeside winner for owner-trainer Jim Marconi, and cost $25,000 as a yearling at the 2015 Magic Millions National Sale.

Snippetson has sired 9 juvenile winners of 11 races this season.  He stands for a $6,500 (plus gst) service fee at Scenic Lodge. 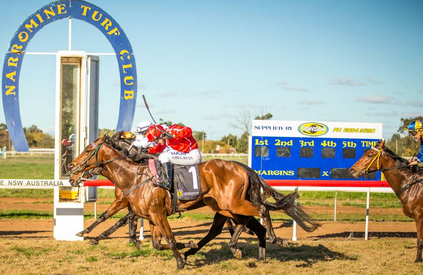 COMING IN HOT
Snippetson colt (No.1) wins the Silver Goblet