Sunspeed star Black Heart Bart has made a triumphant start to the spring carnival in a high-class renewal of the Group 1 Memsie Stakes (1400m) at Caulfield.

The son of Scenic Lodge champion Blackfriars climaxed his previous campaign winning the G1 Goodwood (1200m) in Adelaide and running a close second in the G1 Stradbroke Handicap (1400m) in Brisbane.

On Saturday, just a week after being crowned WA Horse of the Year, he began a Cox Plate preparation with a dominant display in the first Group 1 event of the new Australian season.

Aided by a fast early pace, Black Heart Bart settled behind the leading division before taking control in the straight and sprinting to a resounding victory over Rising Romance (Ekraar) and Mahuta (Flying Spur).

“It couldn’t have worked out any better,” jockey Brad Rawiller said.  “When he let down he was just awesome.”

Black Heart Bart (6g Blackfriars – Sister Theresa by At Talaq) has won 13 races and been placed 11 times from 32 starts earning over $2.28 million.   He cost $20,000 at the 2012 Perth Magic Millions and is raced by a Geraldton-based syndicate that includes Kim Renner, Craig Delacy, Dave Richardson, Arthur Psaltis and Ian McCarthy.

“He’s the best I’ve got and is a perfect horse to train,” Darren Weir said.   “They’re hard to find.  The owners are very keen on the Cox Plate.”

The Caulfield victory deposited $300,000 towards Blackfriars extending his winning run to seven premierships in Western Australia.  He sired the Memsie Stakes winner from a half-sister to NZ & Australia Group 1 winner Savannah Success – the dam of Group 1 racehorse and sire Savabeel. 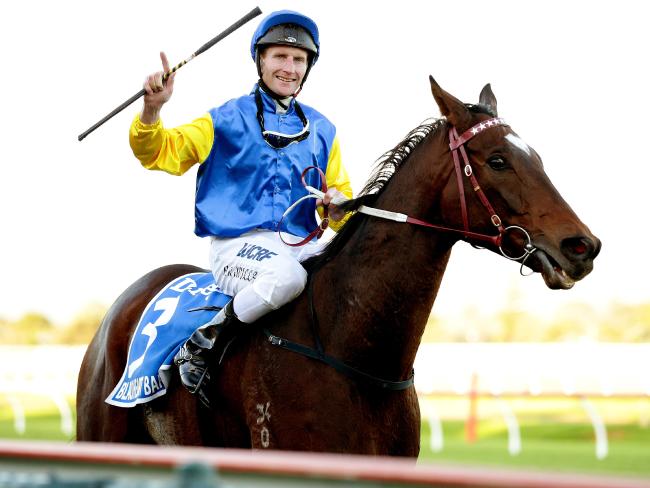