His French-bred gelding unleashed a powerful finish to land the Prix de la Pomme (1200m) by a head for owner-breeder Olivier McDowell.

Forza Libranno (3g Dick Turpin – Bella Vento by Shirocco) settled at the back of a capacity field that split into two for the straight-course sprint.  Angled into the clear of the inner group by jockey Tony Piccone, he lifted a gear and then held off Efferatus who was demoted to third after causing interference to Royal Vati.

McDowell retained the winner who was passed-in for 32,000 euros at the 2014 Arqana August yearling sale.  He’s the first foal of an unraced half-sister to G2 Newmarket July Stakes winner Libranno.

Dick Turpin has 8 winners so far this year from his first crop conceived at the English National Stud.  Black Bess won for the third time at Epsom last month and she runs for prizemoney the equivalent of AUD 126,870 in the Windsor Sprint Series Finale (1200m) on Monday.

Dick Turpin scored his first Group 1 win in France when going away by four lengths in the Prix Jean Prat (1600m) at Chantilly.  He shuttles to Mungrup for an $8,800 (inc gst) fee.

His first Sunspeed crop was headed by front-running Ascot winner Guest Express.  Back in work and pleasing Simon Miller at Ascot, he is a lot stronger this prep and will be back racing soon. 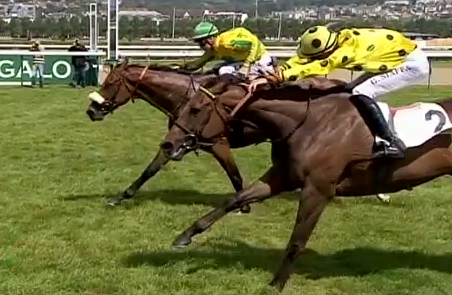