Normal service for Perth Racing resumed on Wednesday when Blackfriars sired a winning treble at Belmont.

Blackfriars is currently marshalling his forces for feature races on both sides of the continent.

Star stayer Kia Ora Koutou is back in work and his long-term goal is the G2 Perth Cup (2400m).  “He has recovered from knee injuries and we couldn’t be happier with his appearance,” co-trainer Geoff Durrant told the West Australian newspaper this week.  “He appreciated a complete absence from the training environment and will follow a traditional lead-up to the Perth Cup.”

Kia Ora Koutou was unbeaten in his first four starts this time last year and then transferred east for a placing in the G1 Victoria Derby at Flemington.  He was last seen finishing fourth in the G2 WATC Derby in April. 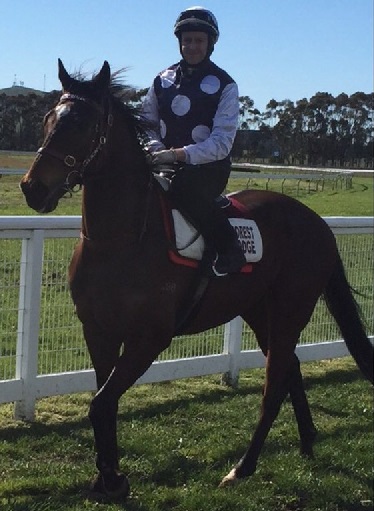 Blackfriars has his G1 Goodwood winner Black Heart Bart getting ready for a first-up run in the G1 Memsie Stakes (1400m) at Caulfield on Saturday week, August 27.  He looked the part trialling with Japanese import Tosen Stardom at Mortlake on Tuesday morning.

“I’m very happy with him,” trainer Darren Weir said.  “It was a nice piece of work and his spring goal is the Cox Plate.”

Black Heart Bart (pictured with John Allen at Mortlake) was crowned WA Horse of the Year at the Hyatt Regency last week.  He was chief earner for Blackfriars in 2015-16 with earnings of $1.44 million.

The G1 Cox Plate (2040m) at Moonee Valley on October 22 carries prizemoney of $3 million and, apart from Black Heart Bart, Western Australia will also be represented by All American filly Yankee Rose.

Under TBWA rules, All American will be eligible for Sunspeed premierships after covering his first local mare on September 1.

Scenic Lodge stands Blackfriars for a $12,000 (plus gst) service fee.