WA sires double up in England

Trade Fair’s Nameitwhatyoulike set the pace and fought hard when challenged to win the Great St Wilfrid Stakes (1200m) at Ripon on Saturday.

Nameitwhatyoulike, a 16/1 chance, was ridden by Connor Beasley for Group 1 winning trainer Bryan Smart who prepares his team from historic Hambleton House in North Yorkshire.

St Wilfrid is the patron saint of Ripon and the winning owners received a silver trophy depicting St Wilfrid on horseback.

Trade Fair has sired 207 individual winners with stakes winners in the UK, Europe, UAE, Hong Kong, Canada and Australia.  He stands for a $5,000 (plus gst) fee at Alwyn Park Stud in association with Lynward Park.

Alfred Nobel 3yo Gin In The Inn overcame problems in running to easily win the Nova Display Hcp (1200m) at Pontefract on Sunday.

Gin In The Inn was held-up at the rear but sprinted hard when clear to beat the favourite Van Gerwen, by more than two lengths.

Gin In The Inn (3g Alfred Nobel – Nose One´s Way by Revoque) had scored on debut at Leicester last year for North Yorkshire trainer Richard Fahey and was one of his 235 winners in 2015 to equal Richard Hannan’s British record set in 2013.

Alfred Nobel has quickly developed in WA’s most promising sire and he stands for $4,500 (plus gst) fee at Lynward Park Stud in Bullsbrook. 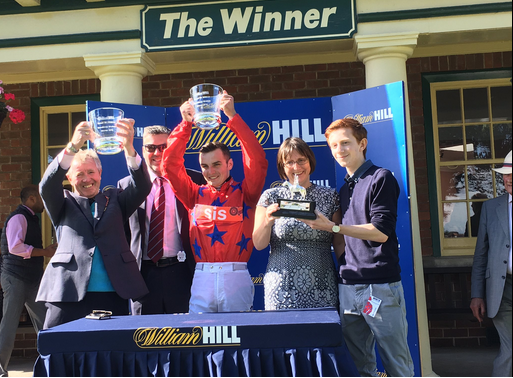