All eyes focused on Yankee Rose when she trialled at the Sunshine Coast on Tuesday.

Now a three-year-old, the David Vandyke trained filly wore blinkers for the first time when finishing fourth without being extended run over 850 metres.

Yankee Rose won the G1 Sydney Sires’ Produce Stakes (1400m) at Randwick in April after a fast-finishing second to champion colt Capitalist in the G1 Golden Slipper (1200m) at Rosehill.

Yankee Rose (3f All American – Condesaar by Xaar) is due to trial again at the Sunshine Coast on August 15 before travelling back to Sydney.  “She had a good break and is a happy horse after the winter off.  Today’s trial went exactly as planned.”

Michael Cahill made the trip from the Gold Coast to ride Yankee Rose.  “They ran 33.25s for the final 600m and she just coasted under her own steam,” Thomas added.  “David didn’t want her having a gut buster chasing that sort of pace.”

Her sire All American finished 2015-16 with winners at Bendigo (Rushmore) and Gosford (A Good Yank) last week to take his season tally to 49 individual winners of 69 races and over $3.05 million in prizemoney.

The Geisel Park sire was also represented by Saratoga sprint winner Aussie Prayer on Saturday.  She is owned by Loudmouth Racing and is the first foal to race for Peg’s Prayer (Rodeo) who won the LR Statue of Liberty Stakes at Saratoga in 2006.

All American (Red Ransom) will begin covering his first Sunspeed book in September for a $10,000 (plus gst) service fee. 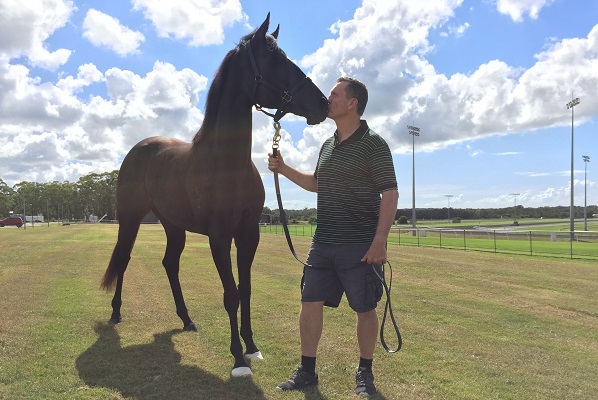 Yankee Rose with David Vandyke at the Sunshine Coast