Yarradale Stud sire City Place (USA) was back in black-type when Royal Jewely won the Winter Melody Stakes (1700m) in Delaware on Wednesday.

The speedy filly (pictured) led at every call to coast home by more than 5 lengths after two months on the sidelines.  She was last seen winning on turf at Monmouth Park in July.

Trainer Gerald Bennett had trouble finding a spot to run her hence the lay-off between races.  “She’s a strong galloper and she kept herself in shape so that wasn’t a concern,” he said.  “And her last few runs were pretty good. 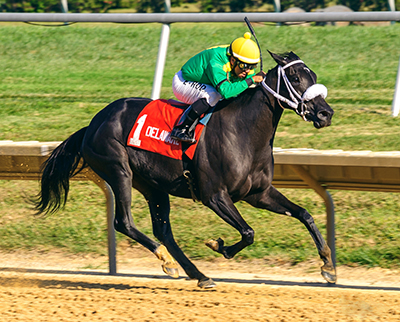 “She was up against (Group 1 winner) I’m a Chatterbox here in June and, before that, there was a reason why she was barely beaten at Parx.  The horse next to her in the gates stepped over and tore off her shoe before they jumped.  The vet brought the shoe over for me after the race.

Royal Jewely (4f City Place – Sheila’s Outback by Formal Dinner) has now won 8 of her 20 starts for owner-breeders Michael & Helen Reynolds of Shamrock Thoroughbreds in Florida.  She runs next in the $100,000 HBPA Stakes at Presque Isle on October 6 and, long-term, will be considered for the Sunshine Millions at Gulfstream Park in Florida.

City Place (Storm Cat) has an 82% strike-rate in North America and Yarradale Stud stands him for a $5,500 (inc gst) service fee.