All American sprinter Invisible profited from a ride to remember by Joao Moreira at Sha Tin on Saturday.

Invisible overcame the outside alley in a big field to score a short-head victory over Rugby Diamond (Snippetson) in the Kam Tin Hcp (1200m).

Trainer Caspar Fownes wasn’t entirely joking when he told connections Moreira would be three or four back on the fence from barrier 14.  “The gate looked a little bit tricky,” Fownes admitted.  “I said ‘Joao, come on mate, you’re the Magic Man’.”

Moreira managed to bounce the equal top weight out and do exactly that, producing a freakish ride to win in a photo-finish.  “I think it was a mix of luck and me riding it well, but also some faith in Caspar and the horse, he was feeling good,” Moreira said.  “He’s definitely going to be better over further and the narrow margin means he won’t go up too much in the ratings.”

Invisible was a $280,000 buy for Team Hawkes at the 2013 Gold Coast Magic Millions and had won a Canterbury maiden before transferring to Hong Kong.  “He carried 133 pounds (60kg) and will come on for that win,” Fownes predicted.  “He will go up in class and will be competitive with a lower weight, over a longer distance.”

His dam Illusionary (Hussonet) has a 2yo colt by All American named Jayeffkay with Lee Freedman and she followed up foaling another All American colt last year. 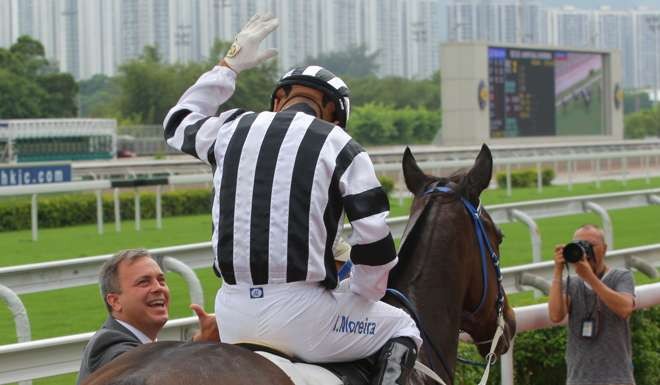