Black Heart Bart has pulled up fine after an unplaced run in the G1 Cox Plate but he’s unlikely to head back home for a tilt at the G1 Railway Stakes.

Trainer Darren Weir has decided to send the trail-blazing son of Blackfriars for a spell after he faded from view at Moonee Valley.  Sent to an early lead by Brad Rawiller, he took a sit behind Vadamos but struggled on the wet ground when Winx put the whole field under pressure at the half-mile.

“He’s quite okay,” stable manager Jeremy Rogers said on Tuesday morning.  “But Darren thinks he’s had enough for the time being.”

A day after the Cox Plate, Blackfriars produced another Railway prospect when Chocolate Holic won the Listed Northam Cup (1600m).

Sunday’s two-length victory improved his strike-rate to 6 wins in 8 starts for Grant & Alana Williams who bred, own and train the rising star of Perth racing.  It was the third Northam Cup for Scenic Lodge’s champion sire following Moneghetti (2013) and Son Of Something (2014).

Chocolate Holic is his 34th stakes winner by Blackfriars and he will continue a meteoric rise into the Group 1 Railway Stakes (1600m) at Ascot on November 19.  Stablemate Perfect Reflection ($8) is the pre-post Railway favourite ahead of Kiwi star Kawi ($9) with Chocolate Holic on the third line at $11.

“It’s a bit special because it’s family,” Grant Williams said as he and Alana were surrounded by well-wishers.  “We blew a lot of ratings points today and we’re going to have a throw at the stumps while he’s going so good.”

Chocolate Holic flew from last on the home-turn to lead a Blackfriars quinella from Young Lionel in the feature race of the Avon Valley season.  His final lead-up to the Railway will be in the G3 R J Peters Stakes (1500m) on November 12.

Winning jockey Willie Pike was very impressed with the winner although he is committed to Perfect Reflection.  “There’s fair bit of improvement left and that very encouraging,” Pike explained.  “He’s a young horse testing the boundaries and I like his attitude.”

Chocolate Holic’s dam World Famous (Geiger Counter) is from a half-sister to G2 Queen of the South Stakes winner Adraanito and LR Towton Cup winner William’s Ghost.  The mare is now owned by Dandaragan breeder Dan Rieusset and she has a 2yo gelding by his sire Deadly Storm. 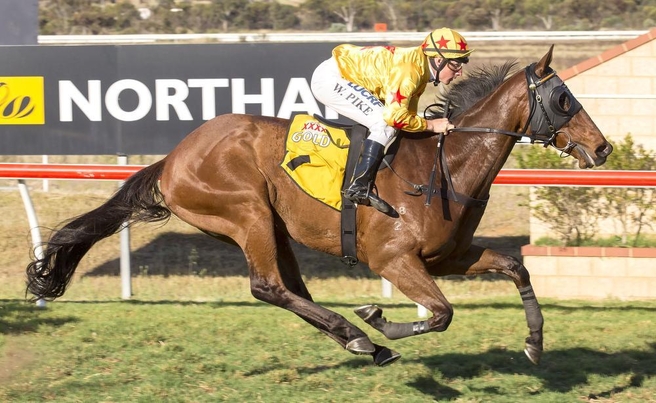