Last-start winner Spirit Seven can continue his rise up the staying ranks in Singapore this Friday.

Spirit Seven landed a plunge with a powerful maiden victory over 1700m on September 30 and he goes up a grade but gets in light over the same trip in Race 8 at Kranji.

The son of Mungrup Stud sire Hala Bek was handled patiently with top-weight of 59kg last time out.  After levelling up with front-runners Grand Paris (NZ) and Sun Hancock (Jpn), he drew clear to win as he liked under Oscar Chavez. 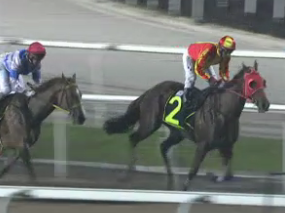 Spirit Seven (pictured) is the final foal of Secretive Lady (Zeditave) and made $30,000 from the Queenslea Park consignment at the 2014 Perth Magic Millions when purchased by Chionh Teck Swee.

Secretive Lady had won races in NSW and Victoria before being purchased by the Piesse family as a racing and breeding proposition in WA.  She came within a half-length of causing a $101 upset at Ascot on the same day King Canute won the 2004 Perth Cup.

Hala Bek has recent Belmont winner Lone Sailor bidding to score again in R8 at Northam this Thursday.  His other winning prospect in the Avon Valley is Royal Tipple in R4.

Irish-bred Hala Bek (Halling) offers broodmare owners one of the few serious sources of staying blood in WA and he is available for a $3,300 (inc gst) fee at Mungrup Stud.