Home All systems go for Ameridon to NZ

All systems go for Ameridon to NZ

All American colt Ameridon is on track for the Karaka Million at Ellerslie after winning a barrier trial at Deagon on Tuesday morning.

Ameridon is assured of a start in the $1 million Karaka Million (1200m) on Sunday week, January 29.  He is currently 7th in order of entry with AUD 17,000 following a last-start victory in the Shay Brennan Constructions 2YO Plate (1000m) at Tamworth on January 6.

Trainer Liam Birchley kept him ticking over with a comfortable hit-out at Deagon.  He won by more than a length from unraced Redoute’s Choice colt Shine Tak Glory.

Birchley knows how to win a Karaka Million having crossed the Tasman for successful hit-and-run raids with Sister Havana (2010) and Hardline (2015).

“Ameridon is physically well developed and looks ideally suited to target the Karaka Million,” Birchley said.  “He’s a big, progressive horse and the flight will take half the time it took from Brisbane to Tamworth.”

The hot conditions didn’t unsettle the colt after the long float trip to NSW.  Starting at odds-on favourite, he travelled in the box seat and won under hands-and-heels ride from experienced hoop Robert Thompson.

“I hadn’t been to Tamworth for 15 years but it’s good to take them on the road,” Birchley explained.  “He needed the money to qualify for New Zealand and it educates the horse.  He looked nice and ran well to get the job done.”

Ameridon cost $140,000 at the 2016 NZB Karaka yearling sale.  His dam Celadon (Danehill) was a Flemington juvenile winner for trainer Tony Noonan and she hails from the immediate family of stakes winners Abidewithme, Miss Scarlatti and A Fairy’s Kiss.

Birchey bought him for a syndicate that includes Just Fun Racing.  Manager Darren Halpin also owns All American winner Lady America who is a stablemate of All American champion Yankee Rose.

All American unveiled another promising youngster in Victoria on Monday morning when his 2yo son Sam’s Image won a barrier trial at Benalla.  He’s a younger brother to All American winners Jill’s Charm and Lady Trickster. 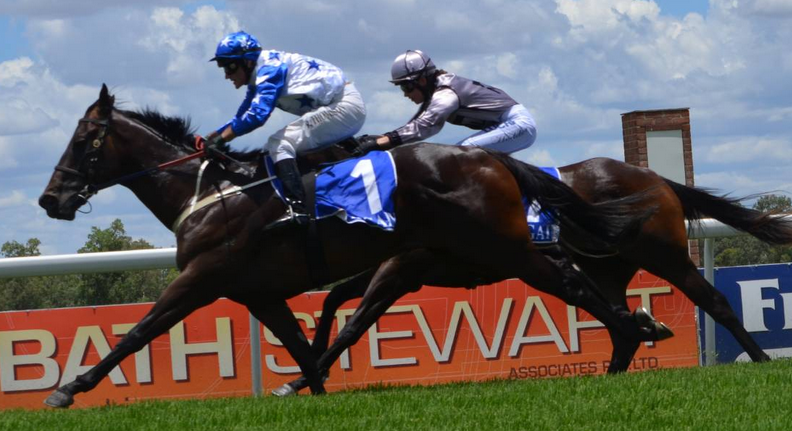