Bob Peters continued his quest for quality bloodstock at the Gold Coast Magic Millions spending $625,000 for a filly by More Than Ready.

Offered by Tyreel Stud, the filly was knocked down to Belmont Bloodstock (FBAA) agent Damon Gabbedy who was acting on behalf of Perth’s leading owner-breeder on Friday.  She’s out of stakes-placed Flying Spur mare Catalonia who is a half-sister to this season’s LR Gimcrack Stakes winner Jorda (Exceed And Excel).

“It’s a proven cross and Jorda is one of the early favourites for the Golden Slipper,” Gabbedy said.  “She was just a standout – mature, great hindquarter, great length and a great walker.  She was very expensive but it’s been a very strong sale.”

Peters and his wife Sandra have a winning record with Vinery champion More Than Ready having raced his Group 1 winning fillies Perfect Refection (Kingston Town Classic) and Dreamaway (WATC Derby).

Earlier at the Magic Millions, Peters sold a Pierro – Moonlight Bay filly for $120,000.  She was offered through Arrowfield Stud and was purchased by Randwick Bloodstock (FBAA) for Mystery Downs. 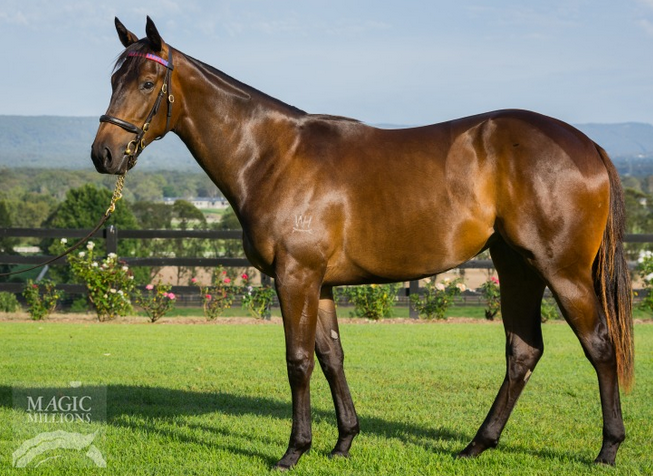