Trainer Darren Weir has decided against sending Kenjorwood to the Gold Coast for the Magic Millions Cup on January 14.

The Snippetson war-horse is in superb form and would have been gunning for a winning hat-trick after wins at Flemington and Caulfield in December.

Kenjorwood became the 12th stakes winner for Scenic Lodge stallion Snippetson when he shouldered 60kg to a narrow victory in the Listed Lord Stakes (1700m) on Boxing Day.

“He’s such a good racehorse with a real will to win,” Weir said at Caulfield.  “He’s in great shape and when you get horses like this in form they can race up on the speed and tough it out.  They make their own luck.”

Kenjorwood (7g Snippetson – Flying Diva by Flying Spur) was a $41,000 purchase for part-owner Leigh Winwood from Grenville Stud at the 2011 Tasmanian Magic Millions.  He has won 10 races and been placed 17 times in 45 starts for earnings over $686,000.

Winning rider Brad Rawiller said he was up against it after a slow getaway from the tricky 1700m start at Caulfield.  “He stumbled out of the gates so I had to press on.  I know it didn’t look good but he settled into a rhythm and I was comfortable because he was the best horse in the race.”

Grenville Stud will offer a full-sister to Kenjorwood at 2017 Tasmanian Magic Millions in February.  Their dam Flying Diva foaled a Written Tycoon filly in October.

Also in February, Snippetson has three colts catalogued for the Inglis Classic Sale and a filly from Gervase Park Stud at the Perth Magic Millions. 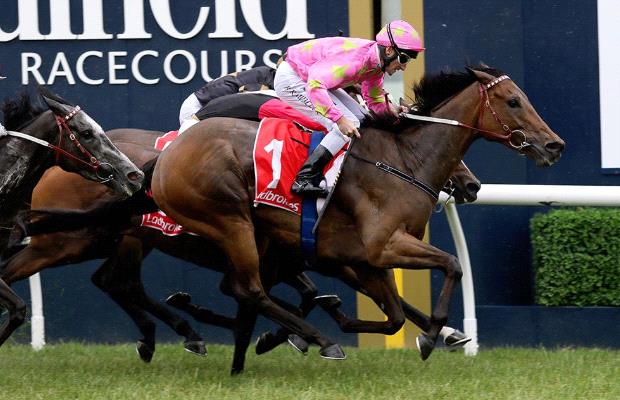