Black Heart Bart kicked off one of those days breeders dream about in the Group 1 C F Orr Stakes (1400m) at Caulfield.

Bred and raised in Western Australia by Scenic Lodge owners David and Jeremy Smith, he is doing a remarkable job promoting the Sunspeed breed and his sire Blackfriars in the lead-up to next week’s Perth Magic Millions.

“He timed it perfectly,” Jeremy Smith said on Sunday while putting the finishing touches to his consignment of 27 yearlings.  “And it confirmed once again you can’t beat Blackfriars for value at the yearling sales.”

Black Heart Bart made $20,000 at the 2012 Perth Magic Millions for a Geraldton syndicate headed by Kim Renner and the Orr Stakes sent his earnings spiralling to $3.12 million.

The Scenic Lodge team cheered him home all the way from WA and they were still celebrating a few hours later when their 2016 graduate Lucy Mae won the $250,000 Magic Millions WA Classic (1200m) at Pinjarra.

And to prove good things come in threes, Scenic Lodge sold a Not A Single Doubt – Card Queen colt for $210,000 through the Tyreel Stud draft at the Inglis Classic Yearling Sale on Saturday night.

“It really was a perfect day for the farm and hopefully it translates into a good sale at the Magic Millions,” Smith said.  “Inspections have been positive – the standout is probably the Blackfriars colt from Athena’s Me Mum (Lot 164).”

The Universal Ruler – Classy Charmer filly (Lot 203) and Dash For Cash – Dark Rock colt (Lot 224) are other highlights for the Perth Magic Millions on February 20 and 21.

Smith can take credit for sourcing Razzia and Card Queen at the Magic Millions National Sales.  He purchased Razzia carrying Lucy Mae for $27,500 and Card Queen for $55,000 a year before her daughter Karuta Queen exploded to championship honours via the $1 million Magic Millions 2YO Classic on the Gold Coast.

“We bought those mares to support Blackfriars and we’ve bred three winners from Card Queen.  Razzia has a beautiful Blackfriars filly on her this year and she’s back in foal to him.”

The Scenic Lodge consignment will be on parade at Belmont from Saturday morning, February 18. 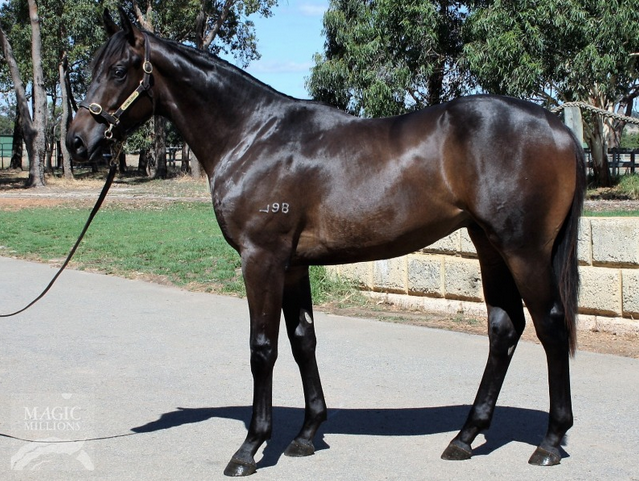