All American colts popular in Adelaide

Geisel Park sire All American completed a successful Adelaide Magic Millions with a Book 1 colt that made $70,000 and Book 2 colt that topped the leader-board at $56,000.

Champion trainer Darren Weir secured the All American – Illusionary colt (Lot 115) for $70,000 from Arrowfield Stud on Tuesday.  He’s a younger brother to Invisible who won his maiden at Canterbury before transferring to Hong Kong for further victories at Sha Tin and Happy Valley this season.

The good looking colt (pictured) was presented as part of the inaugural draft of John Mann’s Tosca Farm at Angaston.  He’s the first foal of winning Redoute’s Choice mare Statuette who descends from a Group 1 winning family in Argentina.

Grand Syndicates manager Peter Morley found a bargain when he paid $18,000 for the All American – Social Register colt (Lot 445) from Cornerstone Stud.  His older half-brother Social Conquest had won a Gold Coast maiden on debut in February.

“We worked hard to steal this excellent colt – he will be trained by David Jolly,” Morley said.  “We had one target in mind and that was to buy an early-running colt which we could initially aim at the Magic Millions Adelaide 2YO Classic.  We’re confident that we have achieved just that.” 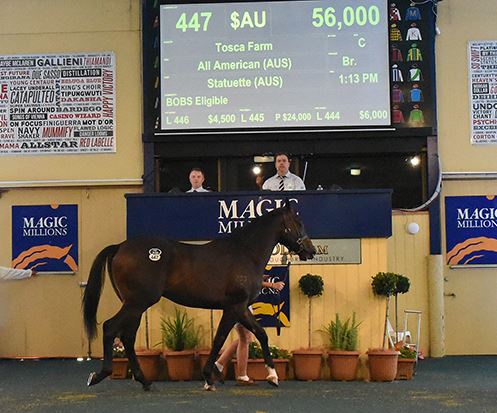