It was also an elite-level breakthrough for trainer Andrew Noblet and jockey Katelyn Mallyon.

Silent Sedition (4m War Chant – Fiorentina by Dubai Destination) was coming off a narrow loss in the G1 Coolmore Classic at Rosehill and she refused to surrender when tackled by Hellbent on Friday night.

“This mare is an absolute ripper,” Noblet said.  “She was dropping back from a mile and coming back from Sydney.  She has never finished worse than fourth in her life and is an unbelievable talent.”

Silent Sedition opened her black-type account in the Listed Bendigo Guineas (1400m) twelve months ago and had added Group 3 victories in the Auraria Stakes, Summoned Stakes and Mannerism Stakes.

Silent Sedition, Quilista and Man Booker were all bred by Korilya Stud’s Ellie Giles who dispersed her broodmares in June 2014.  She sold Fiorentina for $50,000 to Amelia Park.

War Chant (Danzig) has sired 36 stakes winners and he had already struck at Group 1 level with Kingsfort (Curragh National Stakes) and Midnight Interlude (Santa Anita Derby) while based at Three Chimneys Farm in Kentucky.

Silent Sedition is from War Chant’s first crop conceived at Yarradale and her dam is a half-sister to G1 Dubai World Cup winner Monterosso.  She has been installed a $6 favourite to make it a Group 1 double in the Queen Of The Turf Stakes at Randwick on April 8. 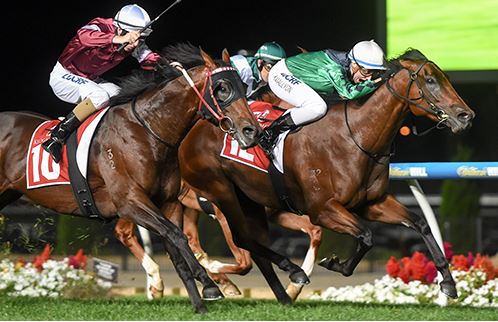