Miss Clooney has been a great advertisement for Pakenham’s state-of the-art racing facility at Tynong.

The club celebrated its second anniversary at the course this week and the Danehill Express mare marked the occasion with a gutsy victory in the Sportsbet Racing Form Hcp (1600m) on Thursday.

Punters also know Pakenham as Racing.com Park with its 2400m turf circuit that gives every runner an equal chance.  Miss Clooney’s on-pace tactics have generated 2 wins and a second-placing in 3 starts there this year.

“She pinged the gates and travelled strongly until I asked her to switch off,” Thomas Sadler said.  “She was challenged a long way out but was tough at the finish.”

Now a 4yo, Miss Clooney started her career with a juvenile win at Kyneton for trainer Greg Eurell and her dam Hey Rosie (Archway) was a versatile money-spinner for Cadet Lodge.  “Hey Rosie was a lovely mare for us and this mare goes well, too” stable rep Sarah Berry said.  “She’s not very big – neither was ‘Rosie’ – but she’s got plenty of toe and will keep improving.”

Danehill Express has sired 33 winners of 53 races for earnings over $1.20 million this season.  He’s an under-rated stallion and more prizemoney went begging when the Mt Barker Cup was abandoned on March 26.

His fellow 4yo stayers Rhino Buster and Daisy Express were among the favourites before stewards called the meeting off citing deteriorating track conditions after the second race.

Daisy Express was coming off a dominant last-start victory at Albany.  “She is racing terrific and has held that form for a long time,” trainer Mark Bairstow said.  “She hits top speed and then grinds her races out strongly.”

Bairstow prepped her to a winning hat-trick earlier this season and is hoping the latest hitch won’t affect her chances for Horse of the Year in the Great Southern.

Daisy Express is the final foal of Belle De Sparta (Spartacus).  Among her earlier winners was Sparta Dame who won 4 races for Bairstow at Bunbury.

Rhino Buster was allocated top-weight of 59kg after rising through the grades at Esperance.  He won 5 from 7 before finishing within a length of On The Ropes in the Esperance Cup on March 5.

“He’s done a huge job this season,” trainer Rod Brown said.  “He’s pretty versatile and we thought he would go well in a race like the Barker Cup.”

Rhino Buster’s dam Surperino (Perugino) started her stud career with the McFlirt brothers McBuster and Go The Slug who combined to win 22 races. 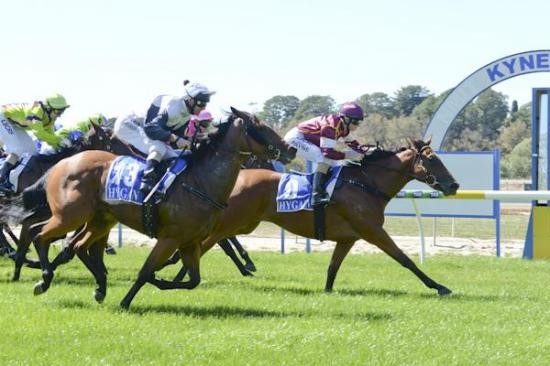