Material Man continued his ultra-consistent form for trainer Justin Warwick with a half-length victory in the Listed AHA Cup (2019m) at Bunbury on Sunday.

It was his 8th win in 12 starts and the first at black-type level for owner-breeders Mike and Jill MacDermott.  “He made tough work of it without any cover,” Warwick said.   “But he was still good enough to get us out of trouble.”

The Listed Bunbury Cup (2200m) on Thursday, March 23 is the next feature race ahead for Material Man.  “He will go up a couple of kilos and hopefully with a good run he doesn’t have to do that much work again,” Warwick added.  “I’ve always said there was plenty of upside to this horse.  He really impresses me.”

Material Man is by Yarradale Stud sire Vital Equine and is the only named foal from Del Lirio (Hussonet) who descends from a very successful branch of the famed Eight Carat family.

Warwick can also win the first-leg of south-west feature double with Quilista in the Listed Bunbury Stakes (1400m) this Sunday.  The Scandal Keeper filly completed a hat-trick at Ascot last Wednesday.

But in a tragic twist a day after her victory, Scandal Keeper was put down at Yarradale Stud.  The 14 year-old son of Danzig shattered a pastern in a paddock accident and vets deemed the injury too severe for him to be saved. 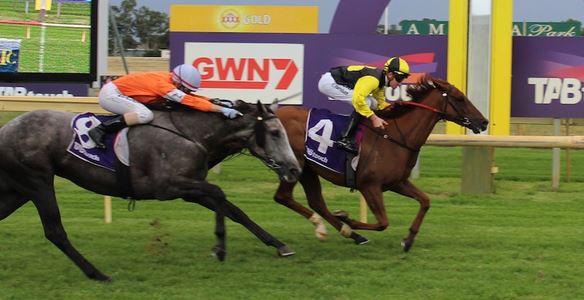