Bradbury’s Luck 3yo colt Lucky Beau helped his sire break through the $1 million barrier in earnings this season at Geelong on Sunday.

“He’s always been a nice horse but has just been a bit unlucky,” trainer Dean Binaisse said.  “There were a couple of races he should have won but had things go against him.

“I thought he did a really good job considering he was out on his feet at the 100m mark but still kept going and gave it everything right to the line.  I’m looking forward to placing him in the right race next start.”

Winning jockey Mark Zahra didn’t panic when Lucky Beau was caught wide from an outside gate in the APCO Service Stations Plate (1300m).  “It wasn’t a disadvantage to be a bit off the fence in the soft going today,” he explained.  “They were going steady up front and he was racing comfortably.

Lucky Beau was purchased at the 2015 Gold Coast Magic Millions March yearling sale for $72,500.  His dam Hennessy Beau (Hennessy) won at Randwick and she foaled another grey colt by Bradbury’s Luck last September.

Now based at Yarradale Stud, Bradbury’s Luck has sired the winners of 41 races this season for prizemoney of $1.05 million.  His leading earner Col ‘n’ Lil has been nominated to continue her winter carnival campaign in the G2 Hollindale Stakes (1800m) at the Gold Coast this Saturday.

Bradbury’s Luck (Redoute’s Choice) will cover his second book in Western Australia this year for a $4,400 (inc gst) service fee. 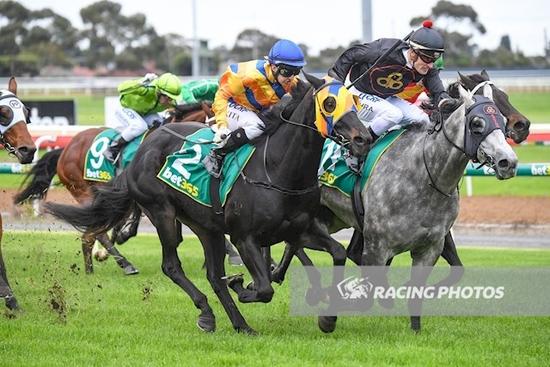