Dick Turpin colt Charger will be set for Singapore’s feature juvenile races after a brilliant debut victory in the Kranji Nursery Stakes (1000m) on Good Friday.

Charger lived up to his name to win the first-leg of the annual juvenile series that culminates in the Group 2 Aushorse Golden Horseshoe (1200m) on July 7.

“He showed us a lot at the trials but was still very colty,” trainer John O’Hara said.  “He was the most forward of our three babies from Australia.  Things went to plan today so let’s hope for better things to come.”

Mungrup Stud bred and sold Charger to Constance Cheng of Toast Trusts Stable for $50,000 at the 2016 Perth Magic Millions.  He’s a half-brother to LR Scenic Blast Stakes winner Dueton and Mungrup bred their dam Californium (Flying Spur) back to I’m All The Talk last year.

Winning jockey Michael Rodd said his mount was just purring along and it was just a matter of clicking up for another gear once he gets into a position to issue his challenge.  “My bloke jumped well and just sat behind the leader.  He showed a nice turn of foot and plenty of qualities first-up, which is all credit to him, as he only passed a trial two weeks ago.”

St Bel also jumped the blocks for Dick Turpin last Sunday.  He got lost on a limb first-up at Ascot but didn’t go around a runner winning the Bet Local Bet TAB Touch Maiden (1300m) at Pinjarra.

Perth agent John Chalmers (FBAA) bought him from Mungrup Stud for $70,000 at the 2015 Perth Magic Millions.  His dam Hot Business (Zedrich) is a half-sister to Group 3 winning sprinter Shining Knight.

Mungrup Stud stands Dick Turpin and St Bel is trained by Albie Beckett for the Sauzier family who have raced Group 1 horses like Megatic and Old Role. 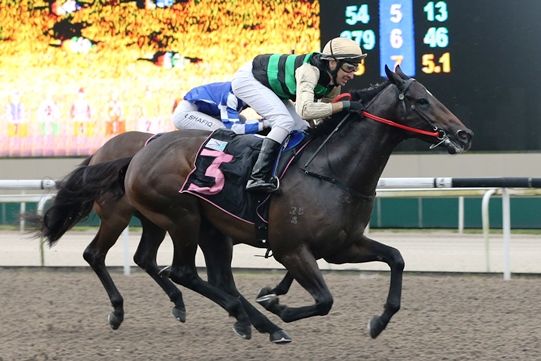