A member of the in-form Toowoomba stables of Ben Currie, Col ‘n’ Lil was courageous in the home straight to hold out her rivals for a gutsy win on Saturday.

It was the second stakes win this preparation for the good looking grey mare who has been catalogued as Lot 679 by owner Dr Kim McCasker at the Magic Millions National Broodmare Sale on Tuesday.

Currie is hoping the new owners will return Col ‘n’ Lil’s to his stables before taking up stud duties.  “She’s always been a good mare but she’s racing even better now,” he said.  “She’s won over 2000m in the past in some good races so we were confident she would run the mile really strong.

“It was a great ride by Jeff (Lloyd).  We wanted to get off and going and make them chase us.  I thought we were in a little trouble at the furlong but she’s so tough in a dogfight.  They get to her and she just keeps fighting.”

Col ‘n’ Lil (5m Bradbury’s Luck – Jyler by Street Cry) had won the LR Weetwood Hcp (1200m) in April and her record now stands at 8 wins in 35 starts for earnings of $497,000.  She is a direct descendant of G1 Australasian Oaks winner Centaurea.

Bradbury’s Luck stands at Yarradale Stud for a $4,400 (inc gst) fee after beginning his career in Queensland.  The best of his 9 stakes winners to date has been WA Horse of the Year Luckygray. 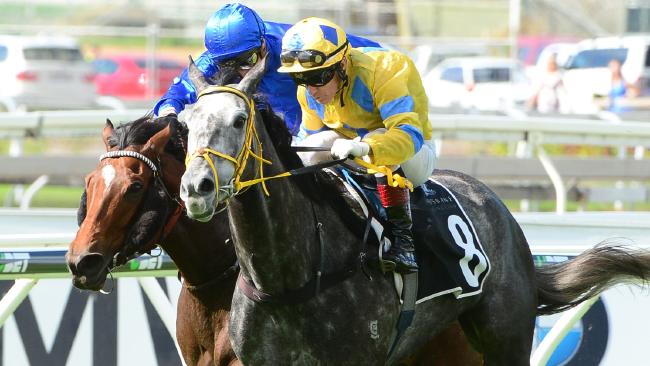