Being described as a ‘westie’ can often be considered a derogatory term, but certainly not if you have four legs, explosive speed and hail from the other side of the Nullabor.

Over the past decade, West Aussie sprinters such as Miss Andretti, Scenic Blast and Hay List have taken scorched earth policy to eastern state Group Ones, with Black Heart Bart the latest and greatest to add his name to the honour board.

Indeed, Black Heart Bart was favoured to add a sixth Group One to his resume on Saturday via the Darley Goodwood – a race he won last year – but was ultimately forced to take a backseat to the West’s newest shining light in Vega Magic.

It was impressive stuff.  Appearing as if he might be overhauled in the last furlong, Vega Magic surged in the closing stages of the 1200m flyer to win with plenty in hand.

Now under the tutelage of David Hayes, Vega Magic was having his first run outside of Western Australia but had built a sizeable record back home with nine wins and three placings from 14 starts, including victories in the Group Three A J Scahill and Group Three Colonel Reeves. Saturday’s win takes his earnings to a very healthy $1,359,550.

Vega Magic is bred and raced by Wally Daly and his brother, George, a former top trainer in Perth whose success stories included multiple Group One winner, Jacks Or Better.

“Vega Magic is by Lope de Vega out of our Magic Albert mare, Admirable, a multiple winner in Perth that we also bred and raced,” Wally Daly explained to Aushorse.  “George has always liked the Shamardals and that’s why we decided to send Admirable to Lope de Vega.

“Lope de Vega was a very good racehorse who won the French Derby and we basically supported the stallion for his four seasons in Australia, sending Admirable every year.

“George is a real student of Tesio – read all the books – and just loves that Giant’s Causeway line. I’m more than happy to take his advice and it certainly paid dividends on Saturday.

“Vega Magic was from Lope de Vega’s first Australian book, while the next year we got Vega Dior, who has only had the one start, then we had a foal who died and, in the last year, a colt that is due to be broken in in the next month or so. Admirable is now in foal to Shooting To Win.”

In Adelaide to cheer Vega Magic on, Daly was quick to praise the Lindsay Park racing stable and happy to be guided by Hayes as to what Vega Magic will take on next.

“I’ve just been out to see the horse and he’s in magnificent order,” Daly adds. “He’s heading straight off to the spelling paddock and will return to the track for the spring.

“David has mentioned the ($10 million) Everest as a possibility, which obviously speaks volumes for his opinion of the horse, but there are plenty of other top races in Melbourne too that he could ultimately target. We’ll just take the stable’s advice.

“This was our first Group One winner as breeders and I’d also like to make special mention of (Perth trainer) Sean Casey who took the horse right through his grades and has done a wonderful job with him. We’re truly indebted to Sean – he’s always believed in the horse – and, although he’s now a Group One winning sprinter, Sean reckons Vega Magic has such a great cruising speed that a Cox Plate might not be out of the question.

“George and I are just happy to enjoy the ride.” 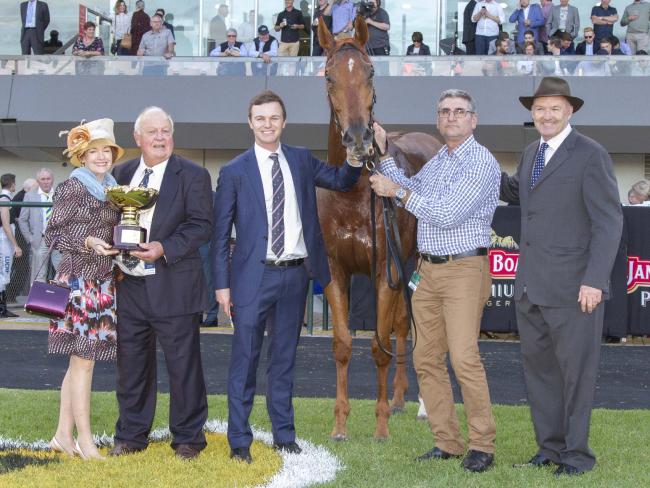