The Not A Single Doubt sprinter has enjoyed a meteoric rise through the ranks after commencing his career as an August 4yo in 2015.  Along the way, he has claimed the $500,000 Country Championship Final at Randwick and two editions of the LR Luskin Star Sprint at Scone.

Clearly Innocent’s belated start was a blessing for Darling View owners Clive & Brent Atwell.  They bought his dam No Penalty (Zabeel) with Yarradale Stud for $16,000 through Premium Bloodstock’s Grant Burns at the 2013 Inglis Easter Broodmare Sale.

They have a weanling colt by resident sire Patronize and the mare is going back to Not A Single Doubt this year.

No Penalty (NZ) was bred by Sir Patrick & Lady Hogan and won three races in Sydney for Gai Waterhouse.  She is a half-sister to the dam of G1 Rosehill Guineas winner Sale Of Century (Prized) and hails from a blue-blooded New Zealand family of Veloso, Domino, Linky Dink & Hero.

Patronize is a son of Redoute’s Choice, just like Not A Single Doubt, and his seasoned sprinter Military Precision won again for Broome trainer Jayne Busslinger in Northam on Thursday.  It was a pleasing run ahead of another possible trip to the Pearl Coast before connections decide whether to retire her or race on.

Foxy Royale is a Patronize set for a winning campaign in the Goldfields on the strength of her eye-catching victory at Kalgoorlie on Sunday.  Given plenty of galloping room, she stormed home from last on the corner with a sustained burst for apprentice Fiona Bell.

The Atwells bred her and have retained her 2yo sister Nonna’s Jewel.  She won a Pinjarra trial for trainer David Harrison in March and was then sent for a spell without facing the starter.

Her stablemate and close relation Parading is another promising Patronize with Harrison.  He won a Northam 2yo maiden and then came back for placings in the Magic Millions 3yo Trophy and LR Rangeview Stud Classic earlier this year.

Harrison also saddled up Patronize 2yo colt Bartrader to win a Lark Hill trial on Thursday and Sharon Miller did likewise in the following heat with her Patronize 2yo Rose’s Shadow.

Patronize will climb up the WA sires’ premiership in 2017-18 with a rising tide of winners helped by a career-high crop of juveniles.  He stands for a $4,400 (inc gst) fee at Darling View. 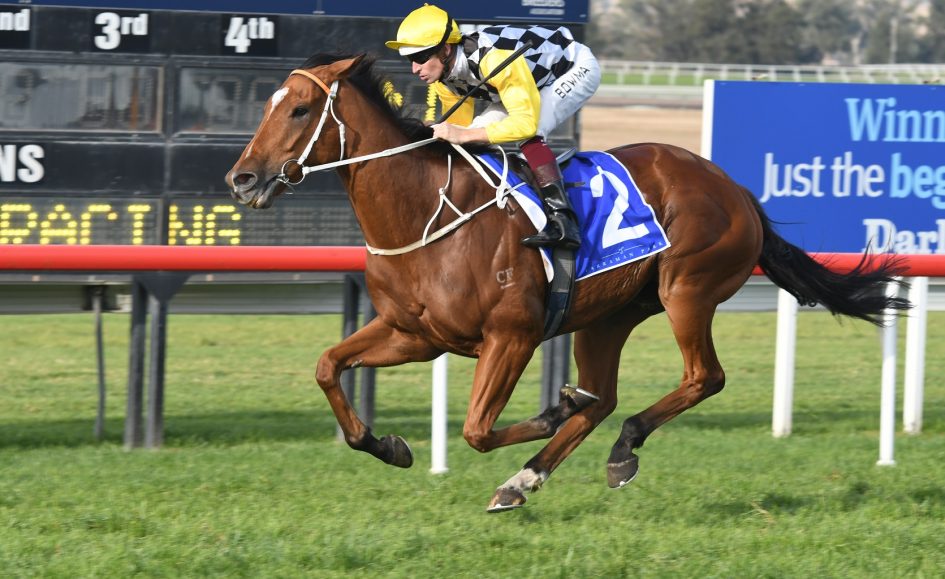