The 3yo daughter of Mungrup Stud sire Oratorio speared through a narrow opening at the furlong to win in a four-way finish last Saturday. “She has been hard to handle but Clint has done a lot of work getting her to settle down,” Durrant said. “That was a good field and she really attacked the line – just like she attacks the feed-bin and all the staff at home!”

For all her vices around the stables, Karlakee Miss is always switched on at the races. She has won 4 times and never been out of a place in 9 starts following a midfield finish on debut at Bunbury last September.

“We got a clean run through but I did call out to Joe (Azzopardi) to let him know I was on the fence,” Johnston-Porter said. “She got the job done with the tongue-tie. She was over-racing but is more relaxed now and will be a better horse again next prep.”

Durrant is also training a yearling brother to Karlakee Miss for his wife Vicki. He has been registered as Luck Has It. And Karla Keys went back to Oratorio for the sixth time last November.

Sir Snugalot is another Oratorio 3yo ready to go on with the job for Aquanita trainer Simon Miller.

A Mungrup Stud homebred, he won a Bunbury maiden on New Year’s Day and his second prep is about to get underway following a Belmont barrier trial win on Monday morning.

Sir Snugalot’s dam Snuglet (Scenic) is back in foal to Oratorio. She’s a half-sister to stakes performers Mendicity & Xaar Boom and reserved her best for Belmont winning 5 races at the winter course for Mungrup owners Gray and Jan Williamson.

Oratorio’s current 3yo crop have won 24 races this season led by the Geoff Durrant-trained filly Sweet Ora whose overall earnings of $372,000 includes Westspeed bonuses of $130,000. 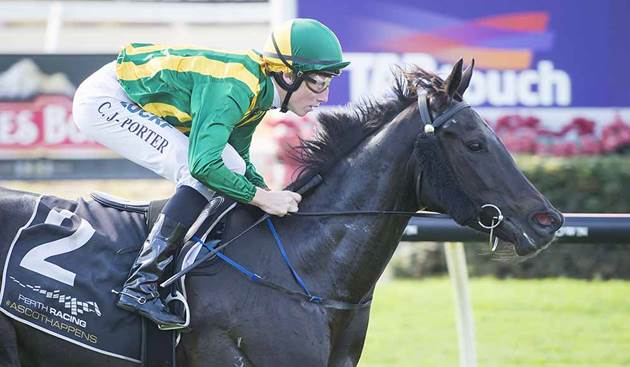