He will join Vital Equine – another former Touchstone resident – and My Atacanta on the Rosalee roster this year.

Planet Five (Storm Cat) was bred and raced by the Niarchos family and won up to Group 2 level in the Prix du Gros Chene (1000m) at Chantilly. He has three crops racing and there have been 13 winners of 22 races this season for prizemoney of $465,320. 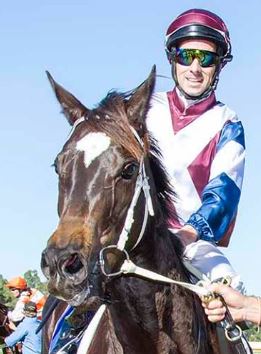 Last-start Ascot winner The Celt has been Planet Five’s chief earner with 4 city wins and $200,000 for part-owner and trainer Vaughn Sigley.

Miss Planet (3f Planet Five – Miss Something by Fimiston) is trained by Tom Widdeson and was racing first-up since New Year’s Day in the Gannon’s Racing Colours Maiden (1000m). Jockey Shaun McGruddy let her coast along the grandstand rail before clicking up a gear to land a $7 into $4 betting move by a half-length.

The winner (pictured) was bred by Steve Palmer, Holly Locke & Paul Huckle and is a half-sister to LR Northam Cup winner Son Of Something (Blackfriars). Their dam Miss Something has a yearling colt by Blackfriars and is due to the champion sire again in August.