Oratorio sprinter Crazy Dreams opened his account with a slashing victory at Kranji on Friday evening.

Starting favourite after three placings in as many outings in Singapore, he was one of the best away and romped in by four lengths.  “I just had to point him in the right direction,” stable jockey Benny Woodworth said after breaking a minute for 1000 metres.  “He’s always shown plenty of speed and I was quite confident he could go all the way.

“We had a soft lead in front, and turning for home, I still had plenty of horse under me.  He won easily.”

Crazy Dreams was bred and sold by Mungrup Stud for $80,000 at the 2015 Perth Magic Millions and is a younger brother to Oratorio’s G2 WA Guineas winner Clueless Angel.

Their dam Petite Angel (Marooned) is a sister to the dam of Elite Belle (G1 Railway Stakes) and Battle Emblem (LR Pinjarra Cup).  She has a yearling colt and a weanling colt by Oratorio and Mungrup bred her back to him last year.

Trainer Alwyn Tan said Crazy Dreams had been knocking on the door but needed to lead to have the best chance of winning.  “He’s been running well and is quite consistent, so I expected him to put in a good run tonight.  When Benny was able to let him go forward I knew he would be hard to beat.”

Oratorio has sired the winners of 33 races in Singapore headed by Rafaello (G3 Garden City Trophy).  He has been WA Champion 2YO Sire on five occasions and stands at Mungrup for an $8,800 (inc gst) service fee. 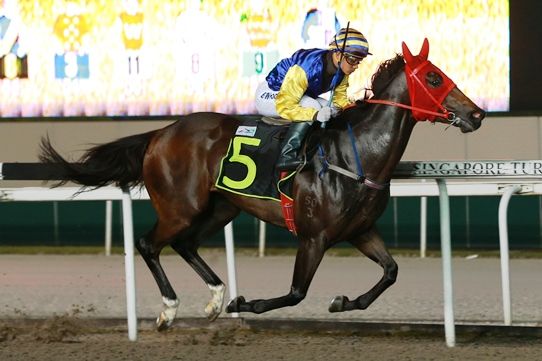