Street Cry stallion Globetrotter (USA) has arrived at Capel to cover his first book of mares in WA.

South-west breeders Robbie and Colin Smith will stand him in association with trainer Brendon Fitzgerald for a $2,500 (inc gst) service fee at Forrest Beach Estate.

“I love the Street Cry sireline and jumped at the chance when Globetrotter came on the market,” Robbie Smith said. “He a lovely horse and has settled in sweet this week.”

Globetrotter is a 12 year-old son of Street Cry from Cool Slew (Seattle Slew) and he can build a successful stud career in the west on the back of some promising signs from his first couple of crops in Victoria. But the pick of them were sold to Asian buyers and haven’t been winning in front of owners and breeders closer to home.

Nevertheless, Globetrotter had sired 11 winners from 25 starters before his ill-fated gelding Chok King broke down at the winning post the first time in the Group 1 Macau Derby last month. After an impressive Warwick Farm trial win for David Pfieffer, he transferred off-shore and had won 4 races and been runner-up in a Group 3 before tragedy struck at Taipa.

His Hong Kong sprinter-miler Energetic Class won twice for trainer Michael Chang last year and looked most unlucky when runner-up on June 11 after a three-horse fall at Sha Tin.

A particularly good-looking chestnut, Globetrotter was bred in Florida and won a 2yo maiden on debut in Pennsylvania before stepping straight up for a Group 3 victory in the $250,000 Grey Breeders’ Cup Stakes at Woodbine.

He was brought back for the 2008 classics but injured a leg and was sidelined for 16 months. Subsequently sent to the west coast, he won a Santa Anita allowance and then motored home for a close second to Juddmonte star Midships in the G1 Charles Whittingham Memorial at Hollywood Park.

Globetrotter aggravated that leg injury in the Memorial and was retired after just 6 starts. His only unplaced run was a fourth in the LR Display Stakes.

For further information about Globetrotter, contact Robbie Smith on 0428 521 166 / rgnsmith1960@gmail.com 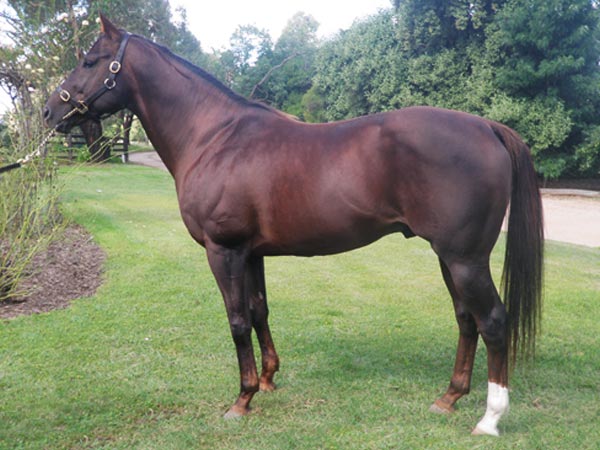