Sunspeed-bred sprinter Sebas returned to form thanks to a gem of a ride by Glen Boss in Singapore on Friday night.

Bred and sold by Gold Front Thoroughbreds, the fleet-footed gelding repelled all challengers, clocking 58.55s for 1000 metres.  Under a vigorous ride, he responded to defeat Olympic Anthem (Starcraft) by a half-length.

“He’s very sharp and always controlled the race.  He’s a horse who always has half-a-length up his sleeve,” said Boss.  “The rest were chasing him down fast, but he’s got that extra little kick.  That’s why they just couldn’t pass him.”

Sebas (Exceed And Excel) has won 9 races and the equivalent of AUD 507,275 for Eagle Eye Stable owner Rodney Too after making $45,000 from the Gold Front consignment at the 2013 Perth Magic Millions.

He is the final foal of Libidinious (Jugah) who was a black-type winner in Sydney, Melbourne & Adelaide.  She was also a Group 1 runner-up to Zip Zip Aray in the 2003 Goodwood Hcp.

Gold Front owners Alan and Sue Olive introduced their new stallion Awesome Rock to broodmare owners earlier this month at Gingin.  The stunning son of Fastnet Rock won the G1 Emirates Stakes (1600m) at Flemington and has been priced at an $8,000 service fee – a fraction of what he would command in the Hunter Valley. 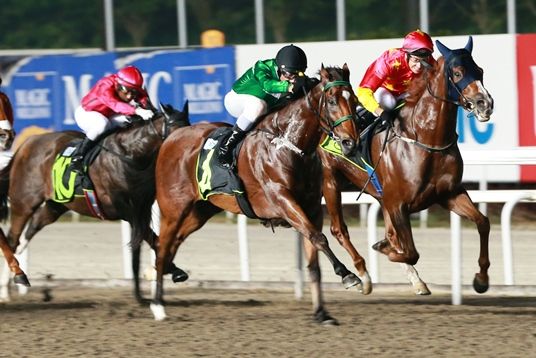