Former Jindera Park sire Illustrious Blue (GB) is looking for a new home on the back of his first winner last week.

The Darren Weir-trained Navy Blue (pictured) opened his account with a determined victory in the Quest Maiden Plate (1600m) at Echuca.  The 3yo gelding raced three-wide without cover and was still too strong for a syndicate managed by Belhus Racing’s Peter Morley. 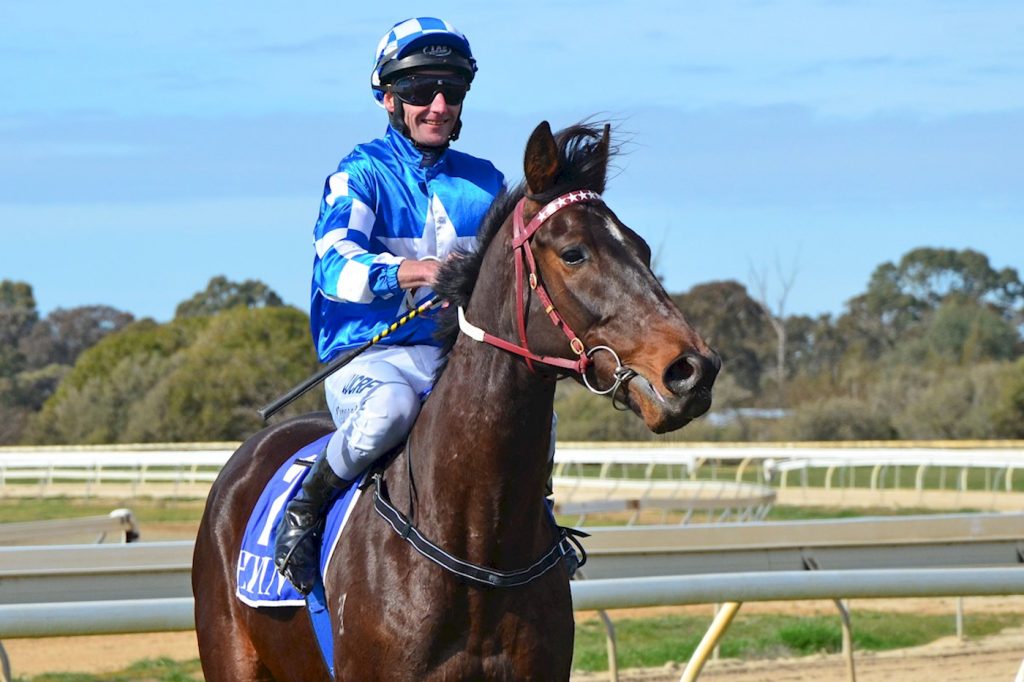 Perth-based Morley owns Illustrious Blue who is a son of successful sire Dansili (Danehill).  “I’m keen to place him in time for the new season,” Morley said.  “Brett Cavanough closed Jindera Park when he moved from Albury to Scone and the stud’s five stallions had to move on.”

Illustrious Blue is currently agisting in NSW and Morley will also field offers from Western Australia.  “Navy Blue looks a promising stayer and there several other nice types in Victoria,” Morley added.  “Luke Oliver is training Charleston Blue for sprints and Robbie Laing reckons Deep Purple will be at his best over 2400m and longer.”

Illustrious Blue won 10 races in England highlighted by the G2 Goodwood Cup and G3 Sagaro Stakes at Ascot.  He also claimed the Derrinstown Stud Trophy in Dubai before arriving in Australia.

His sire Dansili (Danehill) stands at Juddmonte’s Banstead Manor at Newmarket and he has emerged as a potent sire of sires in Europe.

Leading the charge is Zoffany whose stud career got off to a hugely promising start with Illuminate, Washington DC and Waterloo Bridge giving him a hat-trick at Royal Ascot with his debut crop while further success followed with Ventura Storm (G1 Premio Jockey Club).

Another son off to a bright start is Banstead Manor’s Bated Breath.  His first crop in 2016 included the stakes performers Al Johrah, Tis Marvellous, Unabated and Take A Deep Breath.

Dansili’s influence is also being felt internationally with the likes of Harbinger who has sired 188 winners from four crops of racing age at Shadai Stallion Station.  He’s already a Top 10 sire in Japan with Group winners Mozu Katchan, Beruf, Persian Knight, Prophet and Dreadnoughtus.

In New Zealand, Zacinto is off to a bright start at Inglewood Stud with G1 2000 Guineas winner Ugo Foscolo.  And Flintshire became the first son of Dansili to stand in the USA when retiring to Hill ‘n’ Dale Farm earlier this year at a fee of $20,000.

Flintshire covered more than 120 mares, including some from the best Juddmonte families, and received another boost when his close relative Enable ran away with the G1 King George VI and Queen Elizabeth Stakes at Ascot last weekend.